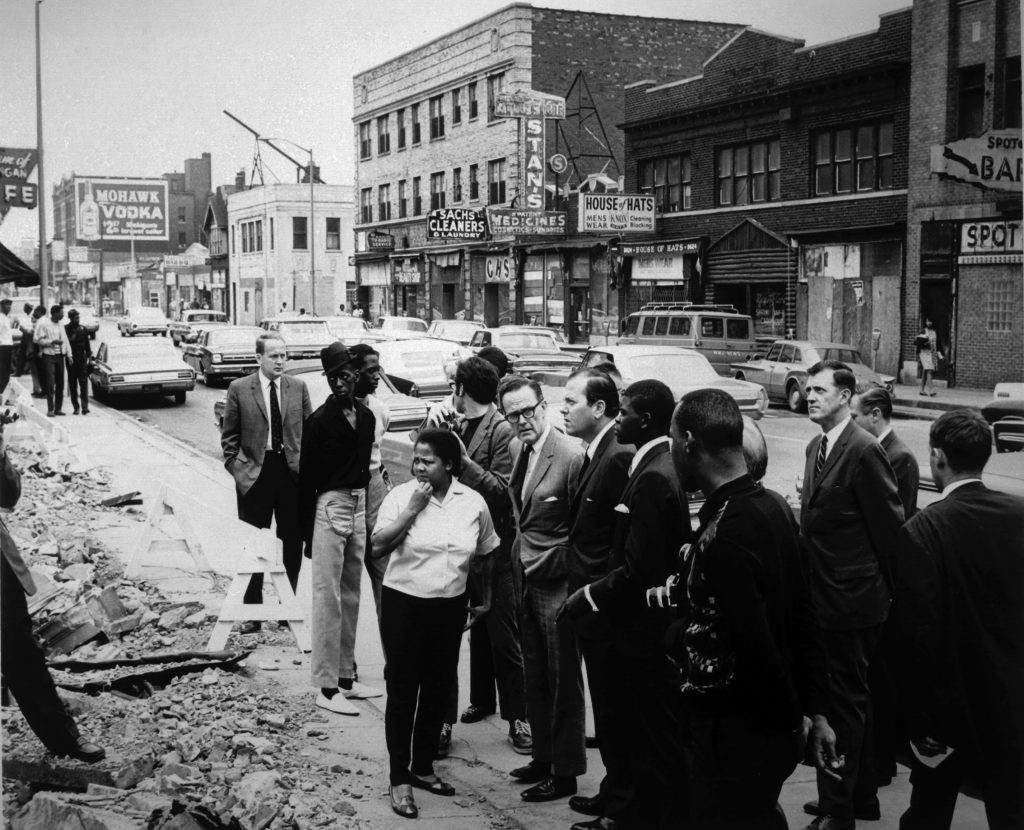 In July 1967, an early morning police raid of an unlicensed bar—or blind pig—on 12th Street in Detroit set off looting, fires, and shooting that soon escalated out of control. By the time the civil disturbance ended six days later, 43 people were dead, hundreds were injured, more than 7,000 people had been arrested, and entire blocks of East and West Detroit had been consumed by fire.

The Detroit Free Press and the Detroit News threw every resource they had into covering the uprising. And as the disturbance died down, journalists and commentators, most of them white, struggled to understand who the rioters were and why they had taken to the streets. One theory was that those who looted and burned buildings were on the bottom rung of society—riff raff with no money and no education. A second theory speculated that rioters were recent arrivals from the South who had failed to assimilate and were venting their frustrations on the city.

But for many, those theories rang false.

Philip Meyer, a national correspondent for the Knight Newspapers—parent company of the Free Press—flew into Detroit to help the exhausted Free Press staff. In a brainstorming session the day after federal troops left the city, Meyer proposed that the Free Press do a survey to delve into the identities and attitudes of the rioters. It was a bold idea. Louis Harris had published survey results in a newspaper column and in Newsweek, and the University of California had just released a report analyzing the 1965 Watts Riots in Los Angeles, but no newspaper had ever tackled such a project. Moreover, Meyer wanted to publish the results in three weeks. The Watts report had taken two years. “We had a lot of adrenaline going,” Meyer says with a laugh.

About 45 miles to the west in Ann Arbor, ISR psychologist Nathan Caplan was having similar thoughts. Caplan had spotted the smoke rising from Detroit on his way back from a family vacation, and had driven to Detroit’s 12th Street on the second day of the disturbance to see for himself what was going on. “I came back from there convinced that somebody has got to study this thing and get some sense of the inner dynamics while it’s still possible to get real-time data on its social/economic reality,” Caplan recalls.

Caplan fired off an emergency proposal to the National Institute of Mental Health (NIMH) asking for funding to study the uprising. At about the same time, Meyer called an old grad school friend at ISR to see who might be willing to work with him on a fast but accurate survey for the Free Press. Caplan and Meyer met and quickly agreed to collaborate.

With the sponsorship of the Detroit Urban League and funding from area foundations and Henry Ford II, the survey team went to work. In one week, Meyer and Caplan drafted the questionnaire—pulling some questions from the Watts survey—and recruited and trained about 30 interviewers from a group of Black Detroit school teachers who fortuitously had just finished a nearby enrichment training program. Meanwhile, ISR researcher John Robinson, recruited by Caplan, used the city directory to draw a random probability sample of addresses in the riot area.

The next week, interviewers spread out through the stricken neighborhoods, reaching a representative sample of 437 Black residents; each day’s completed interviews were sent to Ann Arbor to be quickly transcribed to punched computer cards. The third week, Meyer and Caplan analyzed the data, and Meyer began to write.

On Sunday, August 20, a month after the uprising began, the Free Press‘s special survey report took the city—and the nation—by storm. Among the findings: There was no correlation between economic status and participation in the disturbance. College-educated residents were as likely as high school dropouts to have taken part. Recent immigrants from the South had not played a major role; in fact, Northerners were three times as likely to have rioted.

The top grievances of those surveyed were police brutality, overcrowded living conditions, poor housing, and lack of jobs. Finally, the rioters were a distinct subgroup and did not reflect the overall attitudes of area residents. “The survey helped defuse the situation by showing how much good will there was in the Black community,” Meyer says.

The staff of the Detroit Free Press won a Pulitzer Prize for its coverage of the riot. That, plus Meyer’s publication a few years later of Precision Journalism: A Reporter’s Introduction to Social Science Methods, changed media practices forever by inspiring newspapers to embrace the blending of social science and journalism.

NIMH sent Caplan’s survey proposal to the National Advisory Commission on Civil Disorders, also known as the Kerner Commission. The commission, created by President Lyndon B. Johnson less than a week after the Detroit uprising began, gave Caplan the funding requested from NIMH.

Caplan and Jeffrey Paige, a graduate student, then worked together on a research design to repeat and extend the Free Press data, and collect new data in Newark, New Jersey. Their work became an integral part of the commission’s 1968 report, which made broad recommendations to correct inequalities between the races and to open opportunities for Black participation.