Almost half of older adults have care needs 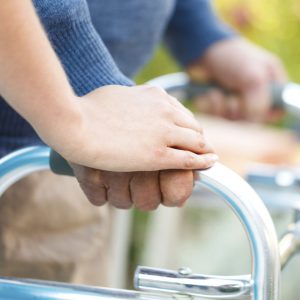 ANN ARBOR—Nearly half of older adults—18 million people—have difficulty or get help with daily activities, according to a new study.

Researchers from the University of Michigan and the Urban Institute analyzed data from a national sample of older adults drawn from Medicare enrollment files. In all, 8,245 people were included in the 2011 National Health and Aging Trends Study. The analysis was published in the current (September 2014) issue of the Milbank Memorial Quarterly.

“Although 51 percent reported having no difficulty in the previous month, 29 percent reported receiving help with taking care of themselves or their households or getting around,” said U-M researcher Vicki Freedman, co-author of the report with the Urban Institute’s Brenda Spillman. “And another 20 percent said they had difficulty carrying out these activities on their own.”

Among those receiving help, one in four lived in either a supportive care setting (15 percent) or a nursing home (10 percent).

Severe disability is more common among those with low incomes, the researchers found. A disproportionate share of low-income persons received assistance with three or more self-care or mobility activities in settings other than nursing homes.

Nearly all older adults had at least one potential informal care network member—family or household member, or close friend—and the average network size was four people.

Older adults who lived in the community reported receiving an average of 164 hours of care a month from informal caregivers—more than five hours a day, on average. Older adults living in supportive care settings reported nearly 50 hours of informal care per month.

About 70 percent of those getting help received assistance from family, friends and other unpaid caregivers, while about 30 percent received paid care.

Unmet needs, especially among those receiving paid assistance, were sizable, according to Freedman and Spillman.

“Among the 18 million who had difficulty or received help, 30 percent had an adverse consequence in the last month related to unmet need,” Spillman said. “Among community residents with a paid caregiver, the figure was nearly 60 percent.”

Given these substantial care needs, especially among those with few economic resources, the researchers conclude that policies to improve long-term care services and supports and reduce unmet needs could benefit both older adults and those who care for them.

The research was funded by the Department of Health and Human Services and the National Institute on Aging.

For a copy of the research report, visit the Milbank Quarterly at www.milbank.org.