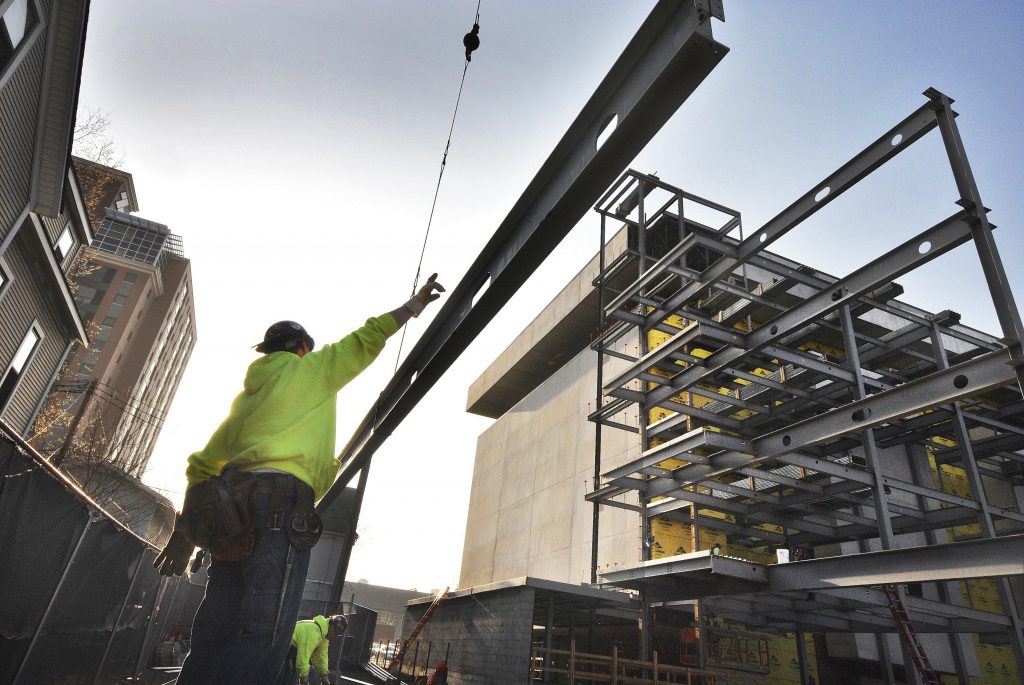 In 1965, after years of wandering from one temporary location to another, the Institute for Social Research (ISR) opened the doors of its new building on Thompson Street with celebration and a collective sigh of relief. Three years later, the Institute had outgrown the space. Thus began a series of leases, expansions, and even the purchase of a nearby former school building to accommodate ISR’s steady growth.

Now, a $14.8 million grant from the National Center for Research Resources, part of the National Institutes of Health (NIH), has—at least temporarily—halted the Institute’s chronic search for accommodations. It has also made possible a new kind of space for ISR that will satisfy developing research needs, improve communications, and encourage an even greater degree of collaboration among researchers and staff. “The fact that we received a grant from NIH for a building is really a phenomenal occurrence,” says ISR Director James Jackson. “We are ecstatic.”

Expanding the building had been a top priority since Jackson became director in 2005. There weren’t enough offices for researchers or staff, entire programs were located offsite, new research directions demanded new technological capabilities, and the Institute was still growing. “It was clear within the first few months that we had a looming problem,” he says. But when Anna Schork, ISR assistant director, spotted the NIH’s request for proposals in early 2009 and encouraged Jackson to pursue it, the likelihood of ISR getting the award seemed slim. First, the University of Michigan had to choose ISR’s project as one of three proposals it could put forward. Second, ISR could find no prior examples of NIH giving an infrastructure grant to a non-biomedical science organization.

ISR cleared the first hurdle in March 2009. Over the next three months, a five-member team at ISR tackled the grant. As they settled in, Jackson says, a strong case emerged for NIH support. ISR’s almost 20-year-old Health and Retirement Study, the world’s largest study on aging and health, was the biggest single NIH grant at the university, and it would benefit directly from added space. But most important was the scientific argument ISR could make.

Jackson and his team also made a strong argument that ISR’s existing space and technology didn’t sufficiently encourage the kind of collaborations that lie at the heart of its interdisciplinary work.

More and more, ISR’s traditional social science research had expanded to include environmental factors and biometric and biological data, including genetic material such as blood draws and saliva. But to continue to excel in this biobehavioral research, a field of growing importance to NIH, the Institute needed better facilities, more staff, and the ability to train new researchers.

Jackson and his team also made a strong argument that ISR’s existing space and technology didn’t sufficiently encourage the kind of collaborations that lie at the heart of its interdisciplinary work. “Mazes are not good for interactions,” says Maggie Levenstein, a research scientist and member of the grant writing team, referring to the sometimes labyrinthine structure of the existing building. “An important part of our pitch to NIH was that by redesigning the physical layout of the building, we would increase interactions.”

Finally, the NIH award would be funded through the American Recovery and Reinvestment Act (ARRA), intended to stimulate jobs and investment, and Michigan was one of the states most in need of federal help. According to ISR’s estimates, the building expansion would bring as many as 200 short-term and long-term jobs to the state. Armed with these and other arguments, the team crafted a 222-page proposal. “James’s vision was huge,” says Arthur “Skip” Lupia, a research professor and another member of the team. “He pushed all the buttons to make this grant happen.” What initially struck some as a long shot paid off. In February 2010, NIH awarded the infrastructure grant to ISR. “It’s really a chance for us to leverage our competitive advantage and bring a lot of benefits in a new area,” Lupia says. After thorough vetting with ISR’s five center directors, the Institute submitted its building plans to NIH for review in June. The proposed addition—consisting of a basement and three floors—will add close to 45,000 gross square feet of space to the Division Street side of the building. According to Doug Koepsell, university architect and project manager, the diverse use of space over the four floors and the siting of high tech capabilities near community areas should create “a very rich interaction.”

For the first time, the basement addition will give ISR adequate space to process biological materials as they come in from the field and to store them in long-term freezers. “What we’re hoping is that this facility will allow people to be creative in their research and take advantage of new possibilities,” Maggie Levenstein says. The basement will also house an improved secure data enclave, including a break area with internet access for researchers who previously had to go upstairs to get online because of restrictions in the secure enclave.

The proposed first floor emphasizes public and collaborative space. A large open room will serve as a 220-seat auditorium, or break into smaller rooms for meetings. Three “collaboratories”—rooms outfitted with advanced computers and videoconferencing technology—will allow easy communication and collaboration with peers at remote locations. And a café opens out to a three-story enclosed atrium.

“This atrium space will play a critical role in bringing about greater interactions among people from all the centers,” says Robert Marans, a research professor who also worked on the grant. Offices, breakout spaces, and conference rooms complete the second and third floors of the addition. And in line with the university’s sustainability initiatives, the entire expansion will exceed by 30 percent a widely recognized energy efficiency standard, and will achieve LEED Silver certification—a standard that considers items such as water efficiency and use of sustainable materials in construction.

Because the federal government wants ARRA funds applied quickly, the project is on a fast track. Construction is expected to start in the fall of 2011 with an estimated completion date of spring 2013. The expansion will cost an estimated $23 million, with contributions from the university and ISR supplementing the award.

Meanwhile, even as the addition moves forward, Jackson is hard at work envisioning ISR’s next phase of growth. Aided by researchers and staff, he is developing a long-range capital plan focusing on the next 50 years at the Institute.

“This notion of building for the future is an interesting play on words,” Jackson says. “This is one step in that direction, but only one step. I have bigger plans.”