ANN ARBOR—More rapid job creation, higher wages and gains in household wealth have eased the financial strains on households as well as supported more favorable buying plans for vehicles and household durables, according to the Thomson Reuters/University of Michigan Surveys of Consumers.

While consumers considered their current financial situation to now be in the best shape since the start of the Great Recession, those gains have not caused consumers to confidently expect a continuation of robust growth in the year ahead, said U-M economist Richard Curtin, who directs the surveys. View and download the chart and table (Excel files).

Nonetheless, confidence is sufficiently high to expand consumption by an annual rate of 2.5 percent in 2014. 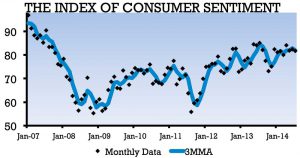 “Despite the recent gains in jobs and wages, consumers have yet to interpret these gains as an indication that more robust growth in jobs and wages will be forthcoming in the future,” Curtin said. “The slow and uneven pace of the recovery in jobs and incomes during the past five years has made consumers unwilling to put much stock in favorable economic forecasts until repeatedly confirmed by positive realizations.

“What may have been termed a skeptical viewpoint in an earlier era, is now regarded as a more practical ‘show-me’ state of mind. This show-me attitude is particularly strong among moderate income families and middle-aged householders.”

When consumers were asked to explain in their own words how their financial situation had changed, one-in-three households mentioned that their income had recently increased. While more work meant higher incomes, the gains were also due to higher wages. This was the most positive assessment of current income trends since the May 2007 survey.

Complaints about higher prices, however, also rose, cited by one-in-five households in July. Unfortunately, the recent gains did not prompt more consumers to expect higher income gains in the year ahead, Curtin said. Just over one-in-four anticipated being better off financially, with half expecting no income gain at all.

The slowdown in home price appreciation and uptick in inflation has had a significant impact on home sales. The median annual increase in home values expected by homeowners was just 0.4 percent in the July survey, well below the expected inflation rate.

Although a resurgent housing market has been an important factor for recoveries in the past, investments in homes are no longer expected to post strong inflation-adjusted gains, Curtin said. This leaves housing demand more vulnerable to even small changes in the pace of home appreciation and the inflation rate.