ANN ARBOR—Consumer confidence reached its most favorable level in the December 2014 survey since the last cyclical peak was set in January 2007, according to the Thomson Reuters/University of Michigan Surveys of Consumers.

The gains over the past several months have been primarily due to improving job and wage prospects and more recently to falling gasoline prices, according to economist Richard Curtin, director of the surveys. Consumers held the most favorable long-term prospects for the national economy in the past decade. Importantly, the 2014 gains in jobs and wages were widespread across all population subgroups and regions. Overall, the data point toward a gain of about 3.0 percent in real consumer expenditures during 2015. View and download the chart and table (Excel files).

“Consumers have much to be thankful for in this holiday season: renewed job growth, larger anticipated wage gains, and the steep decline in gasoline prices,” Curtin said. “Importantly, rather than basing their renewed optimism on volatile oil prices, consumers have become convinced that growing strength in the national economy will result in continued gains in jobs and wages during the year ahead. To be sure, consumers are thrilled to spend less at the gas pump, enabling them to expand their discretionary income during this holiday. Nonetheless, such a ‘tax cut’ is no substitute for a widespread favorable job and income outlook among households.” 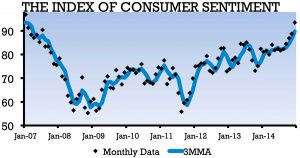 Favorable Job Expectations
Consumers reported hearing more positive economic developments in December than any other time in the last thirty years. Most of the news was dominated by job gains as well as declines in gasoline prices. Nearly two-thirds of all consumers thought the economy had recently improved, and most impressively, half expected the economy to avoid a recessionary downturn during the next five years, the most favorable reading in ten years. When specifically asked about prospects for the national unemployment rate during the year ahead, in the past three months consumers have held the most favorable outlook during the past 30 years.

Higher Income Gains Expected
The best news on personal finances was that consumers anticipated a significant increase in their incomes during 2015. Consumers expected an annual income gain of 1.7 percent in December, up from 1.1 percent in the prior three months and the highest level recorded since 2008. Expected wage gains were especially large among those under age 45, with a median anticipated income gain of 4.7 percent, up from 2.9 percent in last December’s survey.

The Survey of Consumers is a rotating panel survey based on a nationally representative sample that gives each household in the coterminous U.S. an equal probability of being selected.  Interviews are conducted throughout the month by telephone. The minimum monthly change required for significance at the 95% level in the Sentiment Index is 4.8 points; for Current and Expectations Index the minimum is 6.0 points.