ANN ARBOR—Consumer sentiment in April continued to travel on the high plateau established following Donald Trump’s election, with only minor deviations from its five-month average of 97.4, according to the University of Michigan (U-M) Surveys of Consumers.

There is widespread agreement among consumers on their very positive assessments of the current state of the economy as well as widespread disagreement on future economic prospects. Although the partisan divide narrowed in April, it still reflects a very pessimistic economic outlook among Democrats and a very optimistic outlook among Republicans. Partisanship has never had such a significant influence on expectations about household incomes, inflation, and unemployment. The data indicate that spending will advance by 2.5 percent in 2017, but those gains will be uneven over time and across products, according to U-M economist Richard Curtin, who directs the Surveys.

Conducted by the U-M Institute for Social Research (ISR) since 1946, the Surveys monitor consumer attitudes and expectations. The data are available non-exclusively via Bloomberg. 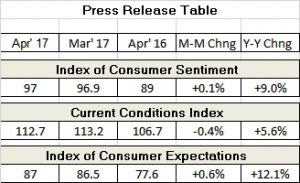 “Selective perception of economic news is the driving force behind the partisan divide,” said Curtin. “Favorable economic developments were cited by nearly every Republican in the April survey, while three-quarters of Democrats reported hearing negative news about the economy. The release of 1st quarter GDP and assessments of Trump’s first 100 days are more likely to encourage continued selective perceptions rather than to reduce the prevalence of extreme partisan views. Optimism among Independents, who may be less susceptible to the sway of political ideologies and account for 42 percent of all consumers, has posted strong gains in the past few months. While the partisan extremes will heighten uncertainty, Independents will help to stabilize the pace of growth.”

Improved finances were reported by half of all households in the past two months—the best record in more than fifteen years. Importantly, there was no partisan difference in how consumers viewed their current financial situation. In contrast, partisanship had a significant impact on how consumers judged their financial prospects: improving finances were anticipated in the year ahead by 48 percent of Republicans but just 31 percent of Democrats.

When consumers were asked about future prospects for the national economy, an improved economy was expected by 66 percent of Republicans but by just 18 percent of Democrats. This sharp partisan difference of 48 percentage points represented a significant improvement over last month’s 68-point difference. Unemployment expectations were the most favorable since 1984, primarily due to the 59 percent of Republicans who expected the unemployment rate would fall below its already low rate of 4.5 percent; just 15 percent of Democrats anticipated falling joblessness.

The Survey of Consumers is a rotating panel survey based on a nationally representative sample that gives each household in the coterminous U.S. an equal probability of being selected. Interviews are conducted throughout the month by telephone. The minimum monthly change required for significance at the 95 percent level in the Sentiment Index is 4.8 points; for Current and Expectations Indices the minimum is 6.0 points.