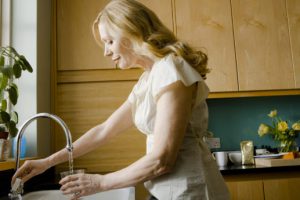 ANN ARBOR — In late 2015 and 2016, a number of studies and media reports focused on the public health crisis in Flint, Mich. in which lead from aging pipes leached into the city’s water supply. The emphasis, for the most part, was on lead poisoning in children. Now, a new set of studies conducted by a community-university research partnership shows the impact of the tainted tap water on the physical and mental health of the city’s adults.

The three studies, led by Daniel J. Kruger, a faculty associate at the University of Michigan’s Population Studies Center, examine the relationship between the tap water and sleep quality, as well as impact of the crisis on the physical and mental health. These projects were initiated to investigate community concerns regarding the tap water’s effects on health, at a time when officials were insisting that the city water was safe.

In one paper, published in the Californian Journal of Health Promotion, researchers looked at the responses to a survey taken by nearly 900 adult residents of Genesee County. Survey respondents were asked to rate the quality of their tap water as well as their physical and mental or emotional health. The researchers found an association between survey respondents who considered their tap water to be of poor quality and those who reported poor physical and mental health, independent of socio-demographic factors known to be associated with these types of health outcomes.

The third paper, published in the Journal of Community Psychology, used the survey results to determine that residents who thought their tap water was of lower quality also reported greater symptoms of post-traumatic stress disorder.

Although the researchers acknowledged the limitations of these studies — the actual toxicity levels of the residents’ tap water were not measured and the survey respondents were not examined and diagnosed — they noted that the findings could be similar in other communities dealing with drinking water contamination.

“These studies indicate that adults who experienced poor tap water quality were more likely to suffer from a wide range of health issues,” Kruger said. “They also demonstrate how collaborative research can address community health concerns.”

“Lead-contaminated water is becoming a concern across the country due to aging infrastructure,” the researchers wrote in the Sleep Health study. The studies note high levels of lead were discovered in the water at nearly 2,600 New York City public schools. They also reference a recent investigation that found nearly 3,000 spots across the country where the rates of lead poisoning were at least double those in Flint during the water crisis.