As retirement age creeps up, health of those close to retirement is getting worse

ANN ARBOR—Ten years from now, Americans born in 1960 will be able to start collecting their full Social Security retirement check, at the age of 67. That’s two years later than their parents, because of a change in the federal retirement age enacted in 1983.

But a new study shows that today’s pre-retirement generation already has more health issues and health-related limits on their lives than prior generations did when they were in their late 50s. The new findings, made by a University of Michigan team using data from long-term health studies and funding from the Alfred P. Sloan Foundation, are published in the new issue of Health Affairs.

The study suggests that today’s older workers will face more challenges than their predecessors as they continue to work, seek work, apply for Social Security disability payments, or try to retire on other income over the next decade. But the researchers also say their findings have implications for any proposals to change the Social Security retirement age, pushing it higher for people now in their 50s and below in order to stretch the federal budget.

“Other research has found similar trends in the health of Americans who are now in the 50s and 60s, but this is the first study to look specifically at groups, or cohorts, of Americans by Social Security retirement age, which has specific policy implications,” said HwaJung Choi, lead author of the new study and an economist and demographer at the U-M Medical School.

“We found that younger cohorts are facing more burdensome health issues, even as they have to wait until an older age to retire, so they will have to do so in poorer health,” said Robert Schoeni, an economist and demographer at the U-M and co-author of the new paper.

Choi and Schoeni are both members of the U-M Institute for Healthcare Policy and Innovation. Last year, they published a paper looking at health-related limitations among people who were in their late 50s and 60s from 1998 to 2012, and found that trends were stable but that those with less education and more economic issues related to the Great Recession had worse health.

The new paper used data from the Health and Retirement Study, funded by the National Institute on Aging and based at ISR, and from the National Health Interview Survey run by the Centers for Disease Control and Prevention.

Both studies go back decades, and provide in-depth data from people of different ages—making it possible to see how different age cohorts were doing at different times.

For this study, the researchers grouped older Americans into five birth cohorts: those who could receive their full Social Security benefits at 65 because they were born in 1937 or earlier, those born during 1938-1942 who could claim benefits sometimes during the year they turned 65, those born between 1943 and 1954 who could claim at age 66, those born between 1955 and 1959 who can claim full benefits somewhere between ages 66 and 67, and those born in 1960 to 1962, who are the first group to have to wait until age 67 to collect their full Social Security benefit. 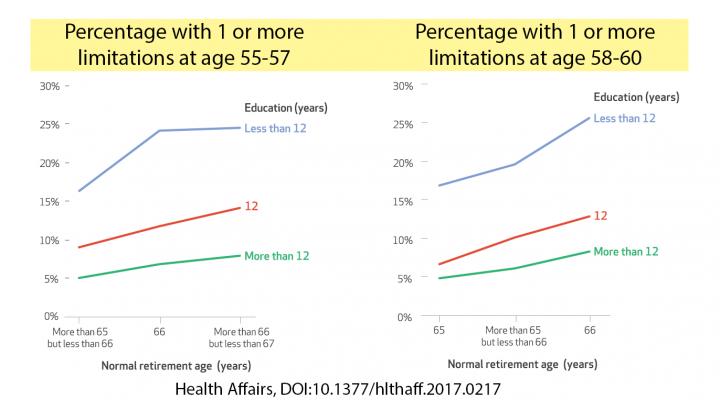 These graphs show the percentage of people in each Social Security retirement age cohort who had at least one health-related limitation on their ability to carry out everyday activities. In addition to differences by level of education, the data show more issues among younger cohorts. Credit: Health Affairs

The authors note that Social Security retirement age changes were made when the people who are now in their 50s and 60s were only in their 20s and 30s. At that time, demographers predicted that they were likely to live longer on average than their parents’ generations.

“Now they are retiring and we know what their health is like—and it’s not better. In fact, some aspects of their health are worse than for the people who came before them,” Schoeni said. “As policymakers talk of making the retirement age even later, these findings suggest that to fully understand the benefits and costs of such a policy, we must realize that raising the retirement age may further exacerbate the inequality between cohorts born only a few years apart, because the younger ones may find it more challenging to work beyond age 67.”

The authors note that among those who rely on Social Security for most or all of their retirement income, education levels tend to be lower, and their pre-retirement occupations tend to involve more physical demands, making it more difficulty to work to an older age. Applications for Social Security disability benefits may also rise among this group, putting even more demands on the overall Social Security budget.

Health can also make a major difference in individuals’ decisions to actually stop working once they reach their Social Security retirement age. Many people want or need to keep working for pay after they start collecting Social Security, and some studies have suggested that working can be beneficial for health. But if their health is poor they may not be able to.

Choi is a research assistant professor in the Division of General Medicine in the U-M Department of Internal Medicine. Schoeni holds appointments in the Institute for Social Research, the Department of Economics in the College of Literature, Science, and the Arts, and the Ford School of Public Policy.