How much money parents give to college-age kids: U-M study 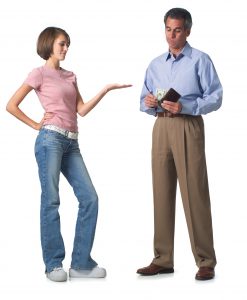 ANN ARBOR, Mich.—More than 60 percent of young adults between the ages of 19 and 22 received some financial help from mom and dad, according to a new University of Michigan study. The average amount they received – including help with college tuition, rent, and transportation – was roughly $7,500 a year.

The study is the first to use nationally representative data to calculate parental assistance to young adults and to analyze how help varies by family and individual characteristics.  It is based on data from 2,098 interviews conducted between 2005 and 2009, with young men and women and their families, part of the Panel Study of Income Dynamics Transition to Adulthood Study at the U-M Institute for Social Research (ISR).

The analysis by Patrick Wightman and Robert Schoeni of the U-M National Poverty Center and Keith Robinson of the University of Texas at Austin was presented at the annual meeting of the Population Association of America in San Francisco. (See working paper.)

“Young people in the U.S. are taking longer to leave home, finish their schooling, get stable jobs, get married, and have children,” says Wightman, who is the MacArthur Network on Transitions to Adulthood research fellow at the Gerald R. Ford School of Public Policy at U-M.  “And the slow transition to traditional adult roles has been accompanied by an increase in the financial support young adults receive from their parents.”

Interestingly, the researchers found that childhood characteristics had a significant impact on the likelihood parents would provide financial help to children when they were young adults.  If parents reported that children age 12 and under were cheerful, self-reliant, and got along well with others, they were more likely to give them financial gifts or loans when they were young adults.

“Basically, this finding shows that parents are more inclined to provide extra support to children whom they perceive as more positive and outgoing,” says Wightman.  “They’re more likely to help those who, even at a young age, help themselves.”

“The slow transition to traditional adult roles has been accompanied by an increase in the financial support young adults receive from their parents.”

About 65 percent of the young adults lived at home for a significant portion of every year, and the analysis did not include the value of room, board or food.  Participants were asked how much money their parents gave to them or paid on their behalf during the past year for each of the following categories: housing away from home, a vehicle, college tuition, help paying pills or just as a gift or personal loan.

Among the key findings:

“As expected, we found a large difference between high- and low-income families both in terms of whether or not they provided financial help to young adult children, and in terms of the amount they provided,” says Wightman.

About 80 percent of high-income parents provided help to young adult children, Wightman found, compared with slightly less than half of low-income parents.

Still, he reports, poorer families who did help their young adult children provided as great a share of their income overall as wealthier families did – about 10 percent.