LEED, or Leadership in Energy & Environmental Design, is a green building certification program that recognizes best-in-class building strategies and practices. 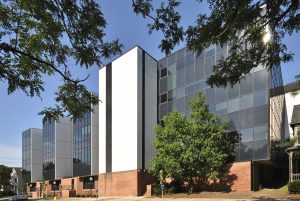 The ISR project, funded by the National Institutes of Health, U-M and ISR, was completed in 2014.

According to Jody Reynolds, ISR Operations and Planning Director, significant features of the ISR project that contributed to its high LEED ratings included its success in using local building materials. “Nearly 37 percent of the total material value was made, or extracted, from within 500 miles,” said Reynolds. “That is well over the minimum LEED guideline of 10 percent.” 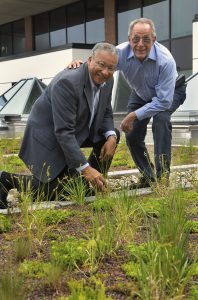 Robert Marans and James Jackson on the green roof of the Thompson street addition. Photo by Philip Dattilo.

In addition, the ISR project restored or protected 87 percent of the natural features of the site outside of the building footprint that were disturbed during construction. The creation of a green roof, planted with seven varieties of native plants, is helping to moderate heating and cooling demands on an on-going basis.

As part of its commitment to sustainability, the project team selected paints, flooring, adhesives, and furniture with low levels of Volatile Organic Compounds (or low VOCs), according to Reynolds. In addition, 56 percent of the construction waste generated on the site was redirected to recycling locations rather than landfills.

“This achievement is the result of the hard work of many,” said ISR Director James Jackson. Jackson extended special thanks to the U-M Office of Architecture, Engineering and Construction; Ann Arbor-based architecture and design firm Lord, Aeck, Sargent; construction contractor Barton Malow Company; former ISR assistant Director Anna Schork; Reynolds; and ISR faculty and staff committee members who carried a commitment to sustainability through all their many decisions.