ANN ARBOR—The University of Michigan Health and Retirement Study has received significant support from the National Institutes of Health (NIH) in order to carry out three important new enhancements to this important resource for aging research.

The study, which began in 1992, follows more than 35,000 people over the age of 50, interviewing participants every two years, from pre-retirement to advanced old age. It is conducted by the U-M Institute for Social Research (ISR) under a cooperative agreement between U-M and the National Institute on Aging (NIA) at NIH. 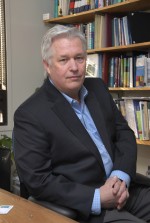 “The new initiatives are innovative across a range of scientific areas and will further broaden our understanding of aging in America,” said ISR research scientist David Weir, who directs the Health and Retirement Study.

With the additional support, researchers will be able to extend the scope and value of the study as they:

“These enhancements expand the already rich content in the Health and Retirement Study,” said John Haaga, Ph.D., Acting Director of the Division of Behavioral and Social Research at the NIA. “How people fare at older ages has a lot to do with the genetic and environmental, including family and societal, influences in their lives. We expect these supplements will provide important opportunities to more deeply examine those factors and how they may interact.”

Funding for the new initiatives is expected to total $40 million over the next three years. That amount is additional to funding for the basic Health and Retirement study. The U.S. Social Security Administration provides additional support for the study.

“This study is one of the most important in the world,” said David Lam, director of the U-M Institute for Social Research. “It brings together scientists from a broad range of disciplines, and is a prime example of Michigan’s strength in interdisciplinary research and ISR’s commitment to collaboration.”

“Michigan is special in being excellent at so many different things and HRS has grown out of that excellence and that diversity,” added Weir, a 1976 Honors graduate of LS&A.

“The ability to collect blood samples in this long-standing, well-characterized study opens up tremendous opportunities for genomic, transcriptomic, and epigenomic studies of aging,” said Kardia.

Most of the research will take place in 2016, when the Health and Retirement Study begins another round of interviews.

The study has a number of international sister studies, allowing researchers to assess global similarities and differences in aging. These include studies in Mexico, England, Europe, Korea, Japan, Ireland, China, Indonesia, Costa Rica and New Zealand. Similar studies are under development in India, Brazil, Scotland, Africa and Canada.