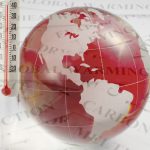 More people believe in “climate change” than in “global warming,” according to a University of Michigan study published in Public Opinion Quarterly. “Wording matters,” says Jonathon Schuldt, a Ph.D. candidate in the U-M Department of Psychology who co-authored the study with ISR researchers Sara Konrath and Norbert Schwarz.

For the research, Schuldt, Konrath and Schwarz conducted a question wording experiment in the American Life Panel, an online survey conducted by RAND, with a national sample of 2,267 U.S. adults. Participants were asked to report their level of certainty about whether global climate change is a serious problem.

Overall, 74 percent of people thought the problem was real when it was referred to as “climate change,” while about 68 percent thought it was real when it was referred to as “global warming.” As part of the study, the researchers also analyzed the use of these two terms on political think tank websites, finding that liberals and conservatives used different terms. Conservative think tanks tend to call the phenomenon “global warming,” while liberal think tanks call it “climate change.” And when the researchers analyzed responses to the survey by political orientation, they found that the different overall levels in belief were driven almost entirely by Republicans. While 60 percent of Republicans reported that they thought “climate change” was real, for example, only 44 percent said they believed in the reality of “global warming.” In contrast, about 86 percent of Democrats thought climate change was a serious problem, no matter what it was called.