ANN ARBOR—Consumer confidence declined in May, according to the Thomson Reuters/University of Michigan Surveys of Consumers.

The decrease in May was not due to the gloomy state of the economy during the 1st quarter—which had the weakest pace of growth in Gross Domestic Product in three years—but rather, because consumers primarily blamed the harsh winter, said U-M economist Richard Curtin, director of the surveys. View and download the chart and table (Excel files).

A much greater impact on consumer sentiment would result if the economy does not post a strong rebound in the months ahead, Curtin said. Importantly, the economy is expected to be strong enough to produce more jobs in the year ahead.

The main concern expressed by consumers involved bleak prospects for wage growth, he said. Tiny wage gains meant that nearly half of all households anticipated declines in inflation-adjusted incomes during the year ahead. Overall, the data are consistent with gains in real consumer expenditures of 2.5 percent during 2014.

Consumers anticipate that the economy will post a much improved pace of growth, and more importantly, create more robust jobs growth in the months ahead,” Curtin said. “The small May loss should not detract from the fact that consumer confidence during the first five months of 2014 was higher than anytime since 2007.

“Data clearly indicate continued strength in consumer spending during the year ahead. Although a good deal of the 1st quarter strength in spending was due to higher utility and insurance payments, consumers will increasingly purchase a broader array of products, especially products that are discounted to fit into more limited budgets.” 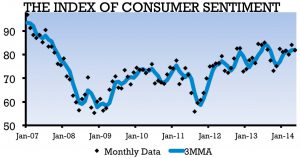 Personal Finances
When asked about their financial prospects for the year ahead, an improved financial situation was expected by just 25 percent of all consumers in May, down from 32 percent last month. Gains in nominal incomes were anticipated by only half of all households, and among those that did anticipate gains, an increase of just 1 percent or 2 percent was most commonly expected. Importantly, consumers under age 45 expected the smallest income increases in six months.

Buying Plans
Vehicle-buying plans were less favorable than last month or last year, especially among households in the top third of the income distribution. The decline was primarily due to less favorable references to discounts, which are critical to buyers who only expect limited income gains. While home-buying conditions were viewed less favorably, it was offset by improved home-selling conditions, largely due to the rising value of owned homes.

Consumer Sentiment Index
The Sentiment Index was 81.9 in the May 2014 survey, down from 84.1 in April, and 84.5 in last May’s survey. The May decline still left the Index comparable to the average level during the prior four months (81.7). The largest May declines were recorded in the Current Conditions Index (94.5, down from April’s 98.7) compared with a decline in the Index of Consumer Expectations (73.7, down from 74.7).
About the Survey