ANN ARBOR—Consumers reported in August that their finances had improved due to more jobs, higher wages and gains in wealth, according to the Thomson Reuters/University of Michigan Surveys of Consumers.

Consumers judged their current financial situation more favorably than anytime since the start of the Great Recession, according to surveys director Richard Curtin. But while past gains have usually been associated with optimism about future gains, consumers remained skeptical about their future financial prospects. View and download the chart and table (Excel files).

Most of the August gains were driven by rising stock prices and wages among households in the top third of the income distribution, while those in the bottom two-thirds reported slightly less positive gains than in July. To be sure, all households have benefited from the resurgent economy. The data indicate that consumption spending will grow at a 2.5 percent pace in the year ahead.

“The stability in consumer expectations during the past nine months has helped to insulate the economy from much larger swings in business investments,” Curtin said. “At the same time, the problem is that confidence has been unable to rise above those modestly positive levels.

“This reflects the ability of the Fed to raise asset prices, which has primarily benefited upper-income households, and its inability to prompt wage increases, which has prevented the reestablishment of a more broadly based optimism. A weakened trend in equity and home prices in the absence of resurgent wages would threaten the modest pace of consumer spending now expected.” 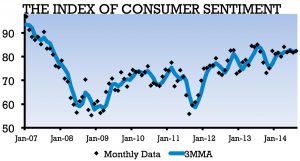 People do not expect as much financial progress during the year ahead as in the past year. Among households with incomes in the top third, just 39 percent expect to improve financially, significantly less than the 59 percent who reported recent financial progress, and only 27 percent expect improvement among those with incomes in the bottom two-thirds, well below the 36 percent who reported recent financial gains.

Consumer Sentiment Index
The Sentiment Index was 82.5 in the August 2014 survey, just above the 81.8 in July and slightly above last August’s 82.1. Over the past nine months, the Sentiment Index has remained largely unchanged, in the narrow range between 80.0 and 82.5. The renewed strength in the past year was focused on Current Conditions (+4.8 percent), while the Expectations Index fell by a slightly larger amount (-3.3 percent).