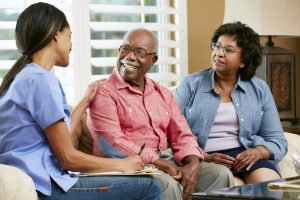 ANN ARBOR—Caregiving is always tough, but it’s that much tougher when caregivers have to rely on family ties that are ambiguous, strained or virtually nonexistent, suggests a University of Michigan study.

Published online this month in the Journal of Marriage and Family, the U-M study is one of the first to explore how divorce and remarriage affect wives who are caregivers.

The issue affects large numbers of Americans. More than 35 million Americans are remarried, and nearly half a million adults over age 65 remarry every year. At the same time, Americans are living longer, with increasing levels of chronic disease.

Carey Wexler Sherman, a research investigator at the U-M Institute for Social Research, interviewed 61 women who remarried in later life and who were the caregivers of husbands with Alzheimer’s disease or other forms of dementia. She asked the women, who were 66-years-old on average, about their social support networks, and assessed their well-being and the amount of disagreement they experienced about caregiving decisions with family and stepfamily members.

“I was surprised at how little adult stepchildren were involved in the care of their fathers,” Sherman said. “Even when the relationships between stepmothers and adult stepchildren were good, there were likely to be problems involving communication about who should be making medical and financial decisions. For caregivers who did not have close ties with adult stepchildren before the onset of health problems with the husband and father, it was even harder.”

From the caregivers’ perspective, adult stepchildren and other stepfamily members were much more likely than their own families and friends to offer unwanted advice, interfere or meddle, to question the caregiver’s decisions, and to say things that were inconsiderate, angry or critical. They also were more likely to let the caregiver down when she needed help.

Sherman also found that many of the remarried caregivers worked to avoid a sense of isolation and the feeling that they had to handle everything on their own.

“Some women turned to counselors, support groups, online websites, as well as their own family and friends, for support and help,” Sherman said. “They did what they could to cope with a difficult situation.”

Still, it was striking how many women reported being virtually alone in their caregiving role, she said.

“They expected and needed assistance from their husband’s children and were deeply distressed when it was not forthcoming,” she said. “It’s important to recognize that a lack of shared family history and norms likely affects the way stepfamily members cope with the demands of taking care of a loved one with dementia.”

Sherman said that caregivers are likely to experience increased burden and depression as a result.

“With so many older Americans in complex family situations, this study signals the need for greater understanding of aging stepfamilies, as well as tailored interventions that address the unique decision-making and care-related support needs of re-partnered older adults,” she said.