Three University of Michigan researchers will lead the Advanced Computational Neuroscience Network (ACNN) project as a “spoke” in the Midwest Big Data Hub program funded by the National Science Foundation. 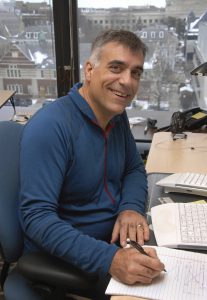 Richard Gonzalez, a psychologist and the director of the Research Center for Group Dynamics at the Institute for Social Research (ISR) and the BioSocial Methods Collaborative, will serve as the principal investigator.

His co-principal investigator’s are George Alter, a historian and research professor with both ISR’s Inter-University Consortium for Political and Social Research and Population Studies Center, and Ivo Dinov, an associate professor in the School of Nursing and School of Medicine, director of Statistics Online Computational Resources (SOCR), and associate director for Education and Training of the Michigan Institute for Data Science (MIDAS).

All three are affiliated faculty of MIDAS.

The ACNN program will leverage rapid technological development in sensing, imaging, and data analysis to facilitate new discoveries in neuroscience, and will foster new interdisciplinary collaborations across computing, biological, mathematical, and behavioral sciences together with partnerships in academia, industry and government. ACNN will address three specific problems relating to Big Data in neuroscience:

The Big Data Hubs and Spokes programs are part of a larger effort at NSF to advance data science and engineering. In Fiscal Year 2017, NSF will invest more than $110 million in Big Data research.