ANN ARBOR—A book by Heather Ann Thompson, professor and historian at the University of Michigan, has won the 2017 Pulitzer Prize in history.

Thompson is the author of Blood in the Water: The Attica Prison Uprising of 1971 and Its Legacy (Pantheon, 2016). She is a professor in the College of Literature, Science, and the Arts in the Department of Afroamerican and African Studies and the Residential College. She also is a research affiliate in the Population Studies Center in the Institute for Social Research.

Winners were announced today. Thompson won in the category of Letters, Drama & Music “for a narrative history that sets high standards for scholarly judgment and tenacity of inquiry in seeking the truth about the 1971 Attica prison riots.”

“Dr. Heather Ann Thompson’s Pulitzer Prize in history is an outstanding example of our faculty’s talent and commitment to academic rigor being recognized at the highest levels,” said U-M President Mark Schlissel. “I am proud to congratulate her on this amazing achievement.”

Thompson spent more than a decade researching the 1971 prison uprising in upstate New York in which armed troopers and corrections officers killed 39 men – hostages as well as prisoners – and severely wounded more than 100 others during a four-day showdown inside Attica. 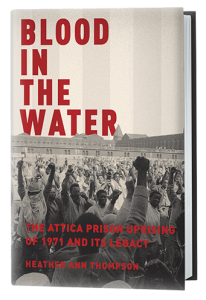 But the uprising comprises just one part of the book; Thompson focuses on the 45 years since. She delivers a detailed account of one of the most longstanding and horrific cover-ups in American history, and chronicles the victims’ decades-long quest for justice.

“The real villains in this story are neither the inmates nor the guards of Attica,” Thompson said, “but the officials outside the system who had the knowledge and power to enact reform, but chose to do nothing.”

Thompson said she was honored to receive the Pulitzer.

“It took me 13 years to finally recover the long-denied and hidden story of all that happened at Attica, and to shine light on what life is really like in places like Attica even today,” Thompson said. “I am so incredibly, incredibly honored and humbled by this news of the Puliizer. Blood in the Water chronicles the history of those many men, prisoners and hostages alike, at Attica who suffered so much trauma for daring to speak up, and I am so incredibly and deeply grateful that their story is being honored in this way.”