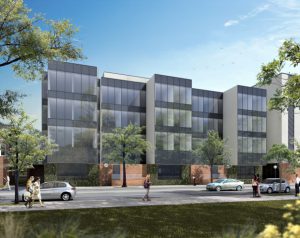 ANN ARBOR, Mich.—The University of Michigan Board of Regents approved moving forward with construction of a $29 million addition to the Institute for Social Research (ISR) at its July meeting.  The five-level addition, which will be located on the Division Street side of ISR’s Thompson Street building, will add approximately 56,700 square feet to the existing ISR-Thompson building.

The Regents had previously approved a four-level addition, but the scope of the project was increased due to ISR’s continuing growth in programs and projects, including a significant increase in federally funded initiatives and a growing number of research and educational partnerships with foundations and corporations.

“This addition is more than a response to the Institute’s pressing need for more space,” says ISR Director James S. Jackson.  “The addition will include new kinds of space that will position ISR to retain its long-time position of leadership in the fast-changing field of social science research.”

According to Jackson, ISR’s traditional social science research portfolio has expanded to include the collection and analysis of environmental factors and biometric and biological data, including genetic material such as blood draws and saliva samples.   These types of data are now routinely collected by large, on-going ISR studies including the Health and Retirement Study and the Panel Study of Income Dynamics, in addition to traditional responses to survey questionnaires.  The new addition will include basement-level secure storage facilities for biospecimens and for secure data enclaves.

The building addition will also enhance ISR’s existing space configurations and technological infrastructure to promote the kind of collaborations that lie at the heart of increasingly interdisciplinary social science research.  The expansion and an accompanying renovation of approximately 12,800 square feet of the existing building, to which the addition will be attached, will help to integrate ISR research programs and provide state-of-the-art facilities for communicating with national and international research partners.

This project is being supported in part from a $14.8 million grant from the National Institutes of Health (NIH) through Grant Number 1 C06 RR 029919 – 01, awarded as part of the American Recovery and Reinvestment Act (ARRA).  Additional funding comes from the U-M Office of the Provost and ISR resources.

Construction is expected to start in August 2012 and to be completed in the summer of 2014.