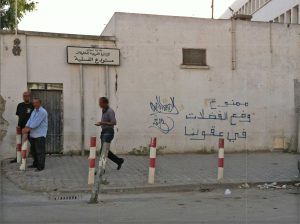 “Do not put garbage in our mind,” reads graffiti printed on the wall of the Roads Administration Office of Tunis City Hall at Fasqiah Warehouse, which is in charge of road maintenance and cleaning.

ANN ARBOR—Public attitudes in Tunisia, the birthplace of the Arab Spring, show strong support for secular politics and religious moderation and tolerance, according to a University of Michigan survey conducted earlier this year.

The findings help to explain the political agreement just reached between Islamists and members of secular groups to form a new Tunisian coalition government.

The survey is part of the Cross-National Analysis of Religious Fundamentalism Study, a systematic study of religious, liberal and other cultural values in seven Middle Eastern countries with Muslim majority populations: Tunisia, Egypt, Iraq, Lebanon, Pakistan, Saudi Arabia and Turkey.

“Religious tolerance is stronger in Tunisia than in the other six countries we’ve studied,” said Mansoor Moaddel, principal investigator of the study.

The results come from face-to-face interviews with a nationally representative sample of approximately 3,000 Tunisian adults.

“But despite public support for the kinds of values that are the basis of American democracy, attitudes towards Americans, while more favorable than in other Middle Eastern countries, have much room for improvement,” said Moaddel, who is affiliated with the University of Michigan Institute for Social Research and the University of Maryland.

Among the key findings of the survey:

The study is supported by the U.S. Office of Naval Research, Africom, MITRE, Society for the Scientific Study of Religion, Eastern Michigan University, University of Michigan and Göettingen University.