How many college athletes actually make it into the pros? How many think they will? Does participating in competitive sports protect from high-school and college substance use, or does it lead to increased use? Does the type of sport matter?

At an April 21 symposium on the well-being of student athletes, researchers from the National Collegiate Athletic Association (NCAA) and the University of Michigan answered these and other questions, presenting a wide range of information of interest to both the academic community and the general public. Margaret Levenstein, a research scientist at the U-M Institute for Social Research (ISR), moderated the event, which was sponsored by ISR, the U-M Institute for Research on Women and Gender (IRWG) and the NCAA.

Lydia Bell, associate director of research at the NCAA, presented an overview of data that her group has collected and analyzed, available to all members of the NCAA, the media and the public, via their website.

“Our data is reflective of today’s student athlete population across all three NCAA divisions,” said Bell, who served as an advisor to Seunghyun Hwang, the second winner of ISR’s James N. Morgan Fund of New Directions in Analysis of Complex Interactions. As a postdoctoral research fellow at the NCAA’s Sport Science Institute, Hwang used a program developed by Morgan to identify predictors of student-athlete stress and happiness.

Philip Veliz, a researcher at IRWG, presented his findings on the paradoxical relationship between competitive sports participation and substance use, based on an analysis of data from the ISR Monitoring the Future Study and other sources. “There’s a myth that taking part in organized sports promotes a healthy lifestyle,” said Veliz. “Yet we know that for adolescents, sports participation is linked with higher prevalence of alcohol use, use of performance-enhancing drugs, and of smokeless tobacco.” In his research, Veliz is analyzing how this overall paradox varies based on factors such as gender, type of sport, and substance. 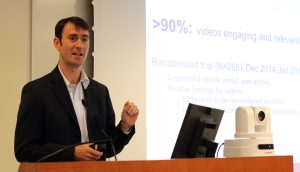 Daniel Eisenberg, a researcher at ISR’s Population Studies Center and at the U-M Depression Center and School of Public Health, provided an update on a program funded by the NCAA aimed at supporting mental health among college athletes. Called Athletes Connected, the program includes support groups and a series of videos designed to encourage athletes to seek help rather than try to conceal depression, anxiety or other emotional problems. For more information, see our previous article.

Finally, Susan Jekielek, Director of the Education Data Archives at the ISR Inter-university Consortium for Political and Social Research (ICPSR), spoke about NCAA data that is available in ICPSR’s NCAA Student-Athlete Experiences Data Archive. “The Academic Progress Rate data and the Graduation Success Rate/Academic Success Rate data have generated quite a bit of interest, with over 1500 downloads of the data and documentation in the past year,” Jekielek said.