Working a lot in high school can short-change students’ future 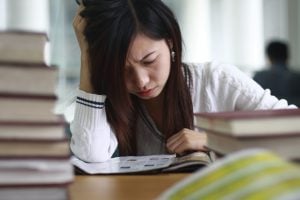 High school students who work more than 15 hours a week during the school year may be short-changing their futures, risking long-term education and health.

New research from the University of Michigan, tracking young adults through their 20s nationwide, suggests that long hours at a job during 12th grade contribute to lower rates of college completion and may heighten the risk of chronic cigarette use.

By age 29 or 30, more than half of the high school graduates who had worked 1-15 hours a week when they were in 12th grade had completed a bachelor’s degree; but every additional 5 hours of work was associated with an 8 percentage point drop in completion, so that only about 20 percent of those who had worked 31 hours or more finished college. After statistical controls for other prior factors, rates of college completion for those who worked 1-15 hours were still one and a half times the rates for those who worked 31 or more hours.

This does not mean that parents should discourage their teenagers from holding any employment during the school year, according to U-M psychologist Jerald Bachman, the lead author on the study. “The students who seem to do best are those who are able to get and hold a job by the time they are seniors in high school,” Bachman said, “but who do not work more than 15 hours per week, on average.”

A great deal of recent research looking at students while still in school has shown that those who spend long hours on the job have poorer grades and lower college aspirations, and are more likely to smoke cigarettes and use illicit drugs. This new study, conducted by Bachman and colleagues at the U-M Institute for Social Research (ISR), appears in the March issue of Developmental Psychology.

“The fact that there appear to be residual effects when respondents reach age 30 strikes us as really important,” Bachman said. “It means that at least some students during high school are trading off long-term educational opportunities for short-term earnings.”

The study makes use of longitudinal data from the Monitoring the Future project, which has been surveying nationally representative samples of high school seniors each year and following more than 68,000 of them throughout young adulthood, beginning with the class of 1976.

The study addresses two key questions. First, it explores whether working long hours in high school may have long-term consequences, well beyond graduation. The present set of analyses are the first use of Monitoring the Future data to show that employment during high school is linked with potentially negative outcomes more than a decade later.

“The fact that there appear to be residual effects when respondents reach age 30 strikes us as really important,” Bachman said. “It means that at least some students during high school are trading off long-term educational opportunities for short-term earnings.” Reflecting on his prior research, Bachman added that “most do not save much of their earnings for college; instead, many simply treat their earnings as spending money rather than investments for their futures. In the past we have called this ‘premature affluence.’ ”

Second, the researchers asked which comes first: “Are long hours of paid work during high school an important cause of problem behaviors, or are they merely a symptom of prior problems?” They found, in essence, that both are true, but even when controlling for prior behaviors and circumstances, the researchers still found significant links between intensive work schedules in high school and negative outcomes later.

“Working more than 15 hours a week while in high school may have some costs that extend far beyond high school,” Bachman said. “The most notable cost is reduced likelihood of college education—with lifelong consequences. A second possible cost is heightened risk of cigarette addiction—with potentially life-shortening consequences.”

In addition to smoking, the study examined other forms of substance use, including annual marijuana use, annual cocaine use, and instances of heavy drinking. Although all of these behaviors are correlated with work hours during high school, the authors attribute these links to other prior causes. Their findings “… suggest little significant impact of 12th grade work intensity on illicit drug use or heavy drinking measured 3 or more years later.”