David Harding: Interrogating the truth of the American Dream 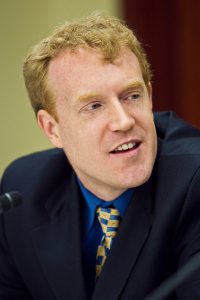 Part of the fun—and challenge—of field research is coping with the odd curve ball. For sociologist David Harding, one episode in particular stands out.

It was the summer of 2003, and Harding, then pursuing his doctorate in sociology and social policy at Harvard, was trying to recruit 60 8- to 13-year-old boys from three poor, mostly African-American neighborhoods in Boston to interview in-depth.In search of contacts, he attended a neighborhood party where, to his chagrin, he suddenly was handed a set of paints and an assignment: Man the face painting table. With a sea of expectant children before him and absolutely no idea how to proceed, Harding took a quick look at the instructions (first, do no harm), then made a rapid calculation. A tiger face—made with rough dashes of orange, black, white, and yellow—would be the easiest and quickest design—and, instinct told him, maybe the coolest, too.

The strategy was a hit. Suddenly, every boy wanted to be a tiger. “I must have painted 80 faces over four hours,” Harding recalls. And along the way, Harding met the mother of the child who would become his first interview subject.

Eight years later, Harding is a research associate professor at the Institute for Social Research (ISR) and an associate professor at the University of Michigan’s sociology department and Ford School of Public Policy. And he’s still known for an unflappable ability to handle whatever is thrown at him. He earlier begged off playing on the sociology department’s softball team, claiming he would drag it down. But colleagues don’t buy it. “Dave is so perfect and understatedly good at everything,” says fellow ISR researcher Jeffrey Morenoff, recalling a faculty bowling party where Harding soared above the crowd, repeatedly bowling over 200. “I don’t even think he had bowled much before,” Morenoff says. “It was like, okay, no surprise there. Besides Dave, who else is ahead?”

Since coming to Michigan as a post-doc in 2005, Harding has made an impressive mark as a leading scholar of poverty and inequality. He won tenure in a mere five years. He won the 2007 Outstanding Faculty Mentor Award from U-M’s Summer Research Opportunity Program. And he was one of three researchers to receive the prestigious 2011 Henry Russel Award, an annual honor given to young and mid-career faculty who have excelled both in their research, and as teachers.

Harding is on a dozen doctoral committees and has overseen research by more than 18 undergraduates. But students say you wouldn’t guess Harding’s heavy workload by his manner. Cheyney Dobson, a graduate student in sociology, says Harding gives quick and thoughtful feedback; peers exclude her from gripe sessions about their advisors, saying, “Oh, she has Dave.” Fourth-year doctoral candidate Geoff Wodtke, who works with Harding on research involving social stratification and racial inequality, says Harding is uncommonly generous with his attention and time. And recent sociology and public policy Ph.D. graduate Jessica Wyse, who works with Harding on a prisoner re-entry project in Michigan, marvels at Harding’s ability to stay unruffled in the face of pressure. “He never seems to get stressed out by anything,” Wyse says. “Which is very unusual, because he has a million projects going on all the time.”

In his quiet, low-key way, Harding has also bucked certain unwritten rules in social science. For one thing, he adopted, as his primary dissertation research topic, a touchy subject: how neighborhood culture affects the views and choices of disadvantaged teenage boys. Tackling “culture” in the context of poverty has been largely off limits for social scientists in recent decades, as it risks association with the much-denigrated “culture of poverty” notion, made famous in a highly controversial 1965 report by then Assistant Labor Secretary Daniel Patrick Moynihan. According to the report, Harding says, poverty created a culture that devalued conventional goals—like marriage, parenthood, and work. The study was widely interpreted as blaming poor Black families for their own hardships. “For a long time, culture was like the third rail of poverty research,” Harding says.

Most sociologists eventually rejected that moralistic view of culture in favor of a more neutral one, he says. The contemporary goal is to understand the lens through which people view their worlds, and the script—or steps—they follow to achieve their goals. When Harding began his work, other scholars had correlated neighborhood conditions with certain behaviors, but Harding wanted to go deeper—to understand how the process worked in individuals, and how conditions affected adolescent boys’ decisions and behaviors in two domains: education and work, and romantic and sexual relationships.

Initially, Harding planned to sidestep the issue of violence. There had already been lots of research on violence in disadvantaged neighborhoods, and he didn’t feel there was much he could add. But as he conducted pilot interviews with 14 boys recruited from the three neighborhoods, it became clear that violence was an organizing principle of their lives; it governed where kids went, who they related to, and what activities they pursued.

In all, Harding interviewed 60 adolescent boys, meeting with each kid two to four times for an average of 90 minutes. His questions were simple, but revealing: What is a typical school day like? What do you do after school? Who do you see? Tell me about a typical Saturday. Where do you go? “We would try to map out how they saw their neighborhood,” Harding says. “They would say things like, ‘Well, even though that Boys & Girls Club is just across the street—I can see it—it’s not a place I can go. That belongs to that group of kids over there.’” Harding also asked how the boys saw the world, how they formed their opinions, who they talked to about school and life and girls, and what those people were telling them. Harding wrote about the results of his Boston-area research in Living the Drama: Community, Conflict, and Culture Among Inner-City Boys. Two main factors lay behind the neighborhood effects in the areas he studied, he concluded in the 2010 book. First was cultural heterogeneity. In wealthier neighborhoods, residents tend to have more homogeneous views of how to do well in school, have safe and appropriate relationships, and make the transition from high school to college.

In neighborhoods that are culturally heterogeneous, though, Harding says, there isn’t just one accepted way of achieving success. Conventional ideas exist alongside alternatives—not just selling drugs or dropping out of school, but also getting a GED or enrolling in a job-training program. Adolescent boys may have trouble deciding which road to take. Or they may aspire to college and a good job, but not understand the steps needed to get there, mixing aspects of different approaches to bad effect.

But although cultural heterogeneity is influential, a second factor—violence—is even more profound, Harding says. Violence, he wrote in the book, “structures social relations, reinforces neighborhood identities, organizes local status hierarchies, and influences boys’ use of space.” Younger boys looking for protection are more likely to hang out with older teens, increasing the likelihood that they’ll be exposed to gangs, sex, drugs, and violence. Violence also lowers the bar on other societal expectations: Parents are so concerned about keeping boys safe, they often don’t have the energy to worry about their sons’ performance at school or their romantic relationships.

Critics have applauded Harding’s book for its substance and accessibility. But even before Living the Drama, Harding’s research was creating a stir. In 2003, Harding published a groundbreaking article in the American Journal of Sociology examining whether neighborhood effects were real or represented failures in methodology. Looking through the lens of high school drop out rates and teenage pregnancy, Harding used a new method of analysis to show that neighborhood effects—not unobserved differences among kids in different types of neighborhoods—were responsible for the higher rates seen in high poverty areas.

According to Morenoff, a member of the U-M team that recruited Harding, that article was part of the buzz that convinced Michigan to “pull out all the stops to get him.” Harding not only used an unusual methodology, Morenoff says, he explained the methodology with a clarity uncommon in academic journal writing. “That’s his style,” Morenoff says. “He just writes very clearly, speaks very plainly, and has a knack for being able to cut to the core of the issue.”

Morenoff describes Harding as “the consummate mixed methodologist.” While the conventional wisdom in sociology is that researchers specialize in either qualitative or quantitative work, Harding is equally adept at both. “There’re not a lot of people who can do both ethnographic research on kids in inner city Boston neighborhoods and do high-powered statistical models,” Morenoff says. In addition to Living the Drama, Harding published three articles based on the quantitative work he did for his dissertation. And at Michigan, he teaches both basic statistics and a new course on community organizing.

Currently, Harding and Morenoff are working on a mixed-method study of prisoner re-entry in Michigan. Using Department of Corrections data, they are tracking a sample of about 11,000 paroled prisoners to study how the social context they find themselves in after release affects their outcomes—in particular, employment, substance abuse, and recidivism. For the qualitative part, Harding, Morenoff, and Wyse are each doing multiple interviews with eight inmates, starting with an interview before their release from prison. “You really can’t understand poverty and inequality—especially its links to race—without understanding the criminal justice system,” Harding says. “This experience of being on parole and coming out of prison is a huge part of the system that we don’t know much about.”

Harding is a soft spoken interviewer who gives subjects lots of room to tell their stories, but rarely speaks of himself, Morenoff says. That jibes with Harding’s reputation as a private man. Most of his colleagues can’t say what he does for fun, or how he fills his spare time—although the birth of his first child, Niko, in June may largely answer that. (“My impression of junior professors is that they primarily work for fun,” notes Wyse.) Sarah Burgard, a fellow sociologist and ISR researcher, says Harding has turned reticence into an art. Her favorite anecdote: when Harding got married, he didn’t mention it. “One week he was ringless, the next week he was wearing a wedding ring,” Burgard notes. “I had to practically beat it out of him that he’d had a major demographic event in the last few days.”

In some people, that degree of reserve might seem unfriendly. That’s not how people see Harding. “He’s a great boss,” says Wyse. “I would go to the mat for this guy,” declares Morenoff.

And, if Harding is work-focused, that focus is rooted in a hope: that his research in poverty and inequality will lead to a better understanding of the dynamics at play in poor areas. That, in turn, may lead to more effective social interventions. In that light, Harding hopes policy makers will take at least two key ideas from Living the Drama. First, costly programs created to convince residents of poor neighborhoods that school, work, and marriage are important aren’t needed. People already know that, he says, and the money can be better spent elsewhere.

Second, most violence in neighborhoods is driven by just a small group of kids. Unfortunately, these are also the kids who are hardest to reach, Harding says, and who won’t voluntarily walk in the door of a youth center. As a result, service providers need to find more proactive ways to find and engage these troubled youth.

The commitment to making life better in difficult and embattled neighborhoods is one Harding shares with his wife, Minsu Longiaru, who runs the Detroit branch of Restaurant Opportunities Centers United, an organization that works to improve conditions for restaurant workers and to help them organize. “We like to tell ourselves that we’re an equal opportunity society: If you work hard enough, everybody can achieve the American dream,” Harding muses. “I think we have an obligation to interrogate whether that’s really the case.”