Beyond the ‘Arab Street’: Cutting-edge public opinion surveys in the Middle East

The “Arab street” is a popular cliché used to describe what people are thinking in the Middle East. But it’s rarely clear how opinions are collected on this proverbial street.

One thing is obvious: There is serious need for a better understanding of the public’s views in the Arab world as the region copes with ongoing social, economic and political challenges.

The University of Michigan is making a significant contribution to meeting this need. Partnering with Qatar University, U-M has helped create an institute that is doing the most rigorous, state-of-the-art social science research in the Arab Gulf. It’s also among the very best research centers of its kind in the entire Arab region.

“There’s no place that comes close to what we and our Qatari partners are doing,” said Mark Tessler, a U-M political science professor and one of the principal investigators in the initiative. 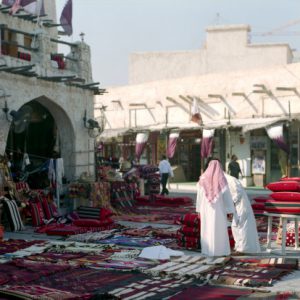 The center—called the Social and Economic Survey Research Institute—started five years ago when Qatar University decided to enhance its social science research capacity and began looking for partners. U-M was sought out partly because the university is home to the Institute for Social Research—the world’s largest academic social science survey and research organization. Experience in conducting public opinion surveys and training programs in the Arab world also led the Qataris to U-M.

It didn’t take the Qataris long to pick a partner.

“We gave them a plan about what we thought they needed to do, key positions to fill, organizational structures and examples of worthwhile projects,” Tessler said. “They took it to their board and came back in a few months and said they wanted to work with us.”

U-M was impressed by the Qatari vision and the prospects for making a significant contribution and readily agreed to the partnership, Tessler said.

Before the 1930s, Qatar was impoverished and known mostly for pearl trading. But the discovery of oil and gas has transformed the tiny Gulf state on the Arabian Peninsula into one of the richest countries in the world. And it’s investing heavily in education, including women’s education.

“They’re creating a knowledge economy,” said David Howell, associate director of ISR’s Center for Political Studies and also a principal investigator in the initiative. “They could sit back and just take advantage of their natural resources, but they’re reinvesting it to understand their society better and make it a better place for the people who live there. I think that’s impressive.”

Since beginning work in 2009, the institute has carried out about 30 national and regional surveys. Many focus not only on Qatari citizens but also on the country’s huge expatriate community, which makes up more than 80 percent of the population.

The studies have included an annual omnibus survey that tracks continuity and change over time in people’s views and perceptions on key issues such as education, media habits, gender relations and the status of women.

Results from the 2012 omnibus survey included:

Tessler said that such surveys are vital for good governance.

“It’s important to know what people think and value,” said Tessler, who also co-directs another multicountry survey project called the Arab Barometer and who has organized survey research training programs in six Arab countries.”We believe that policymakers and officials will be more responsive if information about what the public wants and thinks is available.”

All of the surveys are done face to face, not by telephone, by scores of well-trained and experienced interviewers, Howell said. They use laptops programmed to collect data and send it back to researchers in real time so that the information can be monitored for quality.

“One nice thing is that, unlike Americans, Qataris are not used to being surveyed all the time, so they’re not oversaturated,” Howell said.

Last November, U-M renewed its five-year partnership agreement with Qatar University. One of the next objectives is to create a policy center at the institute that will take greater advantage of the survey data—not just for academic purposes but also to assist and better inform the country’s policymakers, Tessler said.

“That’s important for planning, setting priorities and getting feedback on what seems to be working and not working,” he said.

Howell said the institute is an example of what U-M does so well around the world: capacity building—creating infrastructure that is sustainable and doesn’t depend on U-M to maintain it.

“This is something Michigan can pull out of at some point, and it would still be great,” he said. “It would move on, survive well and be high quality.”

By William Foreman (This news release was first published on the Global Michigan website.)