ANN ARBOR, Mich. — Nancy Burns has been re-appointed Director of the Center for Political Studies at the University of Michigan Institute for Social Research (ISR). A political scientist who has studied the reasons for gender differences in political participation, she was the first woman named to lead an ISR Center in 2005.
“I am pleased to announce that Nancy will remain one of the Institute’s key leaders,” says ISR Director James S. Jackson. “She has shown herself to be an effective leader as well as a prolific scholar and supportive mentor to junior colleagues and students.” 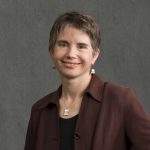 With the reappointment of Burns, and the recent appointment of sociologist Pamela Smock as Director of the ISR Population Studies Center, women will lead two of the five ISR Centers.