ANN ARBOR—Consumer confidence eased in August after reaching its highest level in six years in the prior month, according to University of Michigan economist Richard Curtin, director of the Thomson Reuters/University of Michigan Surveys of Consumers.  Conducted by the U-M Institute for Social Research (ISR) since 1946, the Surveys monitor consumer attitudes and expectations. 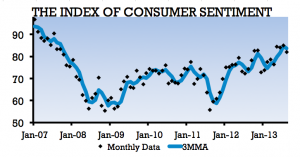 “The August survey indicates that the recent confidence gains have stalled as consumers await decisions on the federal budget and monetary policy,” said Curtin.  “Unlike a year ago, consumers do not anticipate that the budgetary issues will engender a similar Congressional stalemate, but few express a great deal of confidence in the economic policies of the government. A renewed Congressional storm as well as rising market interest rates could trim the anticipated gains in consumer spending and weaken the pace of overall economic growth.  Without this unneeded harm, consumer confidence will regain its footing and act to expand spending in the year ahead.”

View and download the chart and table (Excel files).

While complaints about current incomes increased in August, consumers anticipated the largest income increases since November 2008.  Unfortunately, the median expected increase was just 0.9%, smaller than the inflation rate anticipated for the year ahead.  While consumers still anticipate an expanding economy, the majority are not ready to expect the re-establishment of “good” economic times.  This is largely due to concerns about unemployment; as many consumers expected increases as declines in the jobless rate during the year ahead.

Buying plans for durables and vehicles declined slightly in August largely due to less favorable views of market prices.  Unfavorable views of vehicle-buying conditions rose to 31% in August from 25% in July, although more than half of all consumers still mentioned attractively low prices or interest rates on vehicle purchases.  While home buying attitudes declined, home selling conditions improved: prices were judged less favorably for buying (the worst since 2007), and more favorably for selling (the best since 2006).