ANN ARBOR—Consumer confidence posted its fourth consecutive monthly gain in November, rising to its highest level since July 2007, according to the Thomson Reuters/University of Michigan Surveys of Consumers.

The November gain was due to improved personal finances as well as a more favorable outlook for employment, according to economist Richard Curtin, director of the surveys.

Consumers expressed much more favorable buying plans for durables and vehicles in the most recent survey. Favorable views toward purchases of large household durables were at their highest level since 2007, and favorable vehicle buying attitudes were the most favorable since 2005. View and download the chart and table (Excel files).

Importantly, the gains in buying plans were due to large gains among younger and lower income households, Curtin said. These gains arrived just in time to boost holiday spending, and indicate that total consumer expenditures can be expected to increase by 2.9 percent in 2015.

“In the past few years, renewed consumer optimism has been repeatedly thwarted by partisan bickering. The debt-ceiling debacle, the fiscal cliff and the government shutdown have repeatedly soured economic optimism,” Curtin said. “The renewed confidence consumers have expressed must be nurtured, not again held hostage to partisan differences.

“Based on recent data, consumer spending is poised to make 2015 the best year for the economy since 2005. To accomplish this outcome, the president and congress must dial back the rhetoric and expand their common ground in promoting the continuation of robust gains in jobs and wages in the year ahead.”

When consumers were asked about recent economic developments, job gains dominated all other news items, and when specifically asked, they anticipated the jobless rate to post additional declines during the year ahead. The job gains were attributed to a stronger pace of economic growth. Moreover, consumers voiced the most favorable long-term outlook for the economy since the last cyclical peak recorded in the January 2007 survey.

For the third consecutive month, consumers expected the largest income increases in six years. The annual gain of 1.1 percent expected by all households was the largest anticipated increase since November 2008. Householders under the age of 45 expected the largest gains (4.2 percent), and even households in the bottom third of the income distribution anticipated twice as large a gain as in last month’s survey (0.8 percent, up from 0.4 percent in October). 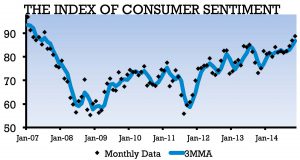 The Sentiment Index was 88.8 in the November 2014 survey, up from 86.9 in October and 75.1 last November. The entire November gain was concentrated in the Current Conditions Index, which rose to 102.7 from 98.3 one month ago and 88.0 one year ago. The Expectations Index was largely unchanged at 79.9 in November, barely above the 79.6 in October, but substantially above last November’s 66.8.