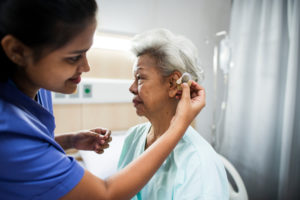 Hearing loss seems like one of the great equalizers of old age, striking people of all kinds as their ears gradually lose the ability to pick out sounds or hear certain pitches. But a new national study reveals major gaps in whether Americans over age 55 get help for their hearing loss – gaps that vary greatly with age, race, education and income.

In all, just over a third of older adults who say they have hearing loss are using a hearing aid to correct it, the study finds. But those who are non-Hispanic white, college-educated or have incomes in the top 25 percent were about twice as likely as those of other races, education levels or income ranges to have a hearing aid.

The cost of hearing aids is most to blame, say the researchers from the University of Michigan who published the study in The Gerontologist, and presented it this week at the annual research meeting of AcademyHealth, professional society for healthcare researchers.

They can cost thousands of dollars out of a patient’s pocket, since most health insurance programs, including Medicare, don’t cover them.

In fact, the study finds that the only factor that leveled the playing field for hearing aid use was having insurance through the Veterans Administration, which covers hearing aids in many cases. Hearing-impaired veterans ages 55 to 64 were more than twice as likely as their non-veteran peers to use a hearing aid, even after the researchers corrected for other differences. The gap between veterans and non-veterans was also significant for those over age 65.

But the detailed interviews conducted for the study also show that personal concerns about hearing aid use, and lack of engagement with health providers, play a role.

“Hearing aids are not easy for many to obtain due to their costs,” says Michael McKee, M.D., M.P.H., the U-M family medicine physician and assistant professor who led the analysis. “However, there are a number of additional issues that place at-risk groups at an even larger disadvantage to achieving good hearing health. Many of these issues are beyond the financial aspects, including racial/ethnicity and sociocultural elements, for instance stigma and vanity.”

McKee, who uses a cochlear implant to overcome his own hearing loss, worked on the study with Helen Levy, Ph.D., a health economist and professor at the U-M Institute for Social Research, and other colleagues. The authors are members of the U-M Institute for Healthcare Policy and Innovation.

They used survey data from the nationally representative Health and Retirement Study, which is based on interviews conducted by ISR with funding from the National Institutes of Health.

The analysis included data from more than 35,500 people nationwide over age 55 who said they had hearing loss. In addition, McKee and colleagues conducted in-depth interviews with 21 other older adults with hearing loss in the communities surrounding the University.

“Many people may not realize that Medicare does not cover hearing aids,” says Levy. “But it doesn’t, so cost can be a significant obstacle preventing older adults with hearing loss from getting the help that they need.”

More Findings from the Study

A recent study led by McKee’s colleague Elham Mahmoudi, M.D., found that having a hearing aid was associated with a lower chance of being hospitalized or visiting an emergency room in the past year. That study focused on individuals over age 65 who had severe hearing loss, and used data from a federal database.
McKee leads the Health Info Lab, which is carrying out research on health information use and literacy among deaf and hard-of-hearing individuals.