Click here for a video about the new lab space.

ANN ARBOR—Fredda Clisham washes her hands at a bathroom sink—something she’s done thousands of times in her 96 years.

But this time, it’s different. This time, Clisham, an Ann Arbor resident, is washing her hands in front of a two-way mirror in the bathroom of the U-M HomeLab, a new lab built at the U-M Institute for Social Research geared toward helping researchers study how people interact with their environment—and with each other.

The HomeLab, housed within the U-M BioSocial Methods Collaborative, looks and feels like a complete apartment. It has every fully functioning convenience, including a stove, microwave, refrigerator and washer and dryer, that a home has. But unlike a home, the lab is outfitted with technology that allows researchers to observe how people live their lives. 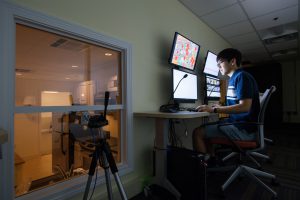 Researchers use two-way windows and mirrors to observe how people move around in our most familiar environment: home.

“If you’re trying to understand something such as the behavioral implications of Alzheimer’s disease and the participant in the study is in a little cubicle answering memory questions, you don’t really understand much how Alzheimer’s might impact their behavior,” said Richard Gonzalez, director of the BioSocial Methods Collaborative as well as of the ISR’s Research Center for Group Dynamics, in which the collaborative is housed.

“We came up with the idea of creating a more realistic testing environment. The goal was to be able to study the interaction between behavior and biology in a well-controlled setting that’s realistic.”

Inside the lab, the rooms look just like any apartment. A front door opens to a living area with a television, Kinect for Xbox One, two chairs and a coffee table. An L-shaped kitchen hugs one corner with a window over the sink and a kitchen island. The living and dining rooms lead into a bedroom, two windows framing the bed. Toward the left of the apartment’s entrance is a fully functioning washer and dryer as well as a bathroom with a shower compliant with the Americans with Disabilities Act.

It’s easy to forget the apartment is a laboratory. In the apartment’s ceiling, microphones pick up on study participants’ conversation. Disguised cameras record their interactions, and are high-powered enough to zoom in and read the text on a box of cake mix.

The Kinect for XBox One can help researchers analyze a person’s walking speed, a predictor of wellness. Lining the lab is an observation deck where researchers can view study participants in the lab through the two-way mirror in the bathroom and the windows in the kitchen, dining room and bedroom, which are tinted and wrapped with a decal that mimic an outdoors view. The lighting is also tunable: researchers can simulate a bright sunny day or the amber hue of a sunset.

“The HomeLab’s technology allows researchers and technicians to observe every point of interaction in the lab as unobtrusively as possible,” said Alicia Carmichael, the research process manager for the BioSocial Methods Collaborative. “It allows that observation to fade into the background.”

This kind of capability excites Jacqui Smith, U-M professor of psychology who imagines using the space to study the interactions of families or how people with joint diseases such as arthritis might adapt everyday activities to their surroundings. For example, people with arthritis may tell researchers they don’t have difficulty washing the dishes, but then grab the soap bottle with two hands to minimize pain from their arthritis.

“In the lab, we would actually ask them to do tasks, like taking something out of the refrigerator or filling up a jug of water or a kettle or adding something to a saucepan and placing it on the stovetop to heat,” said Smith, also a member of the ISR Survey Research Center. “We can record their facial expressions, vocal expressions of pain and get their physiological assessment at the same time, to evaluate how they’ve adapted to completing a task.”

“They may not report being challenged or frustrated, but it probably shows on their facial expression, or we can see it in changes their pulse rate or blood pressure,” Smith said.

Gonzalez hopes the space can be used by researchers ranging from engineers to microbiologists to study how our biology and behavior interact.

“It’s not just that biology determines behavior: you’re born with genes and you’re set. It’s not completely the nurture side, in which environment determines everything. Instead, the environment changes the biology, and the biology changes the way we respond to the environment, and then cascades down and changes the biology further,” Gonzalez said. “The broader goal is to bring people together who want to play ball, who want to be inspired by people who studied other disciplines to push their thinking and push their science.”

The creation of the lab was a collaborative effort, with input from the Taubman College of Urban Planning and Architecture, Penny W. Stamps School of Art and Design, College of Engineering, School of Nursing and Medical School. U-M Construction Services built the lab and U-M Architecture, Engineering and Construction designed the interior space with funding from the Office of the Provost, Institute for Social Research and the Michigan Institute for Clinical & Health Research.

The Institute for Social Research’s IT group designed the data pipeline for the huge amounts of data that will flow from the U-M HomeLab. The BioSocial Methods Collaborative team researched components of the lab as well, traveling and talking to other similar labs at MIT, Georgia Institute of Technology and Toronto Rehabilitation Hospital, among others.

U-M celebrated the lab’s opening on Tuesday, September 26, 2017 at the Institute for Social Research. 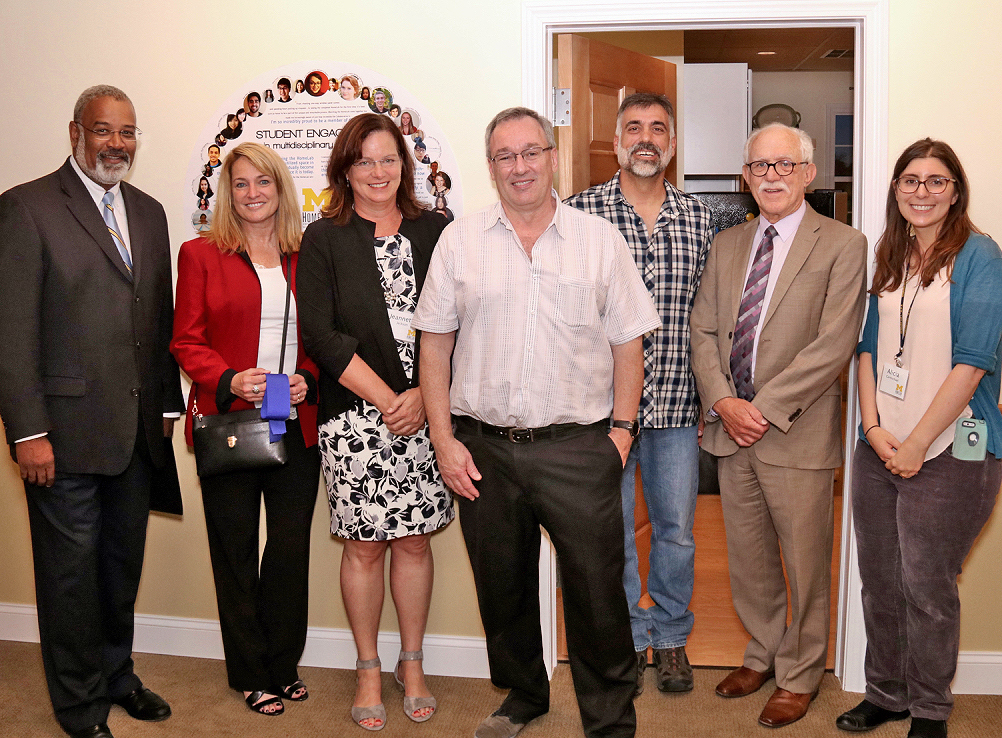