Influencing an Insurgence: The Role and Responsibility of Social Media 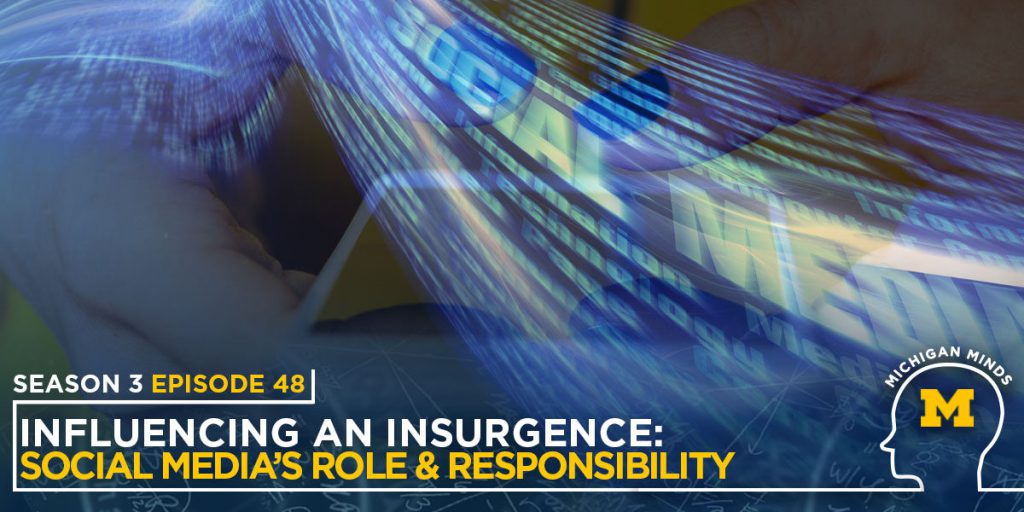 ANN ARBOR – Social media’s impact on how we connect, communicate, and consume information is undeniable. Initially a catalyst for bringing people together, as these platforms have matured, they’ve also played a prominent role in sowing misinformation and division.

Libby Hemphill, Research Associate Professor at ICPSR, Associate Professor of Information, and Associate Director of the Center for Social Media Responsibility, joins Nikki Sunstrum, U-M Director of Social Media and Public Engagement, to discuss the role that social media played in the events that unfolded at the U.S. Capitol, including the implications of social media platform sanctions against President Donald Trump, their responsibility as gatekeepers of public information, and the evolution of online connectivity—including the emergence of Parler.

Hemphill’s research interests focus on the implications of social media conversations on social and political systems. In this episode of Michigan Minds, Hemphill explains the similarities and differences that she saw between the insurgence on January 6, 2021, and past online movements and rebellions.

“Extremists use social media to incite violence without consequence every day, some examples would be the Arab Spring or the Rohingya genocide in Myanmar. What’s different about it this time is that it happened here,” Hemphill says. “But the social media platforms’ complete lack of response was not new at all. And I think that it was both upsetting and welcome that social media platforms responded, finally.”

Hemphill and Sunstrum explore a myriad of platforms, including the recent rise of Parler, which bills itself as a “free speech platform.” Hemphill compares it to an early version of Twitter—individual users post short messages that are fed into a timeline for others to see. The difference, she says, is that Parler is financially-backed by individuals who prefer less control over what they are allowed to say, rather than ad-supported.

Hemphill says that the protests and riots in the Capitol demonstrated, especially with much of the organizing taking place in private Facebook Groups and publicly on Twitter, that those who wish to do harm are not hiding.

“Platforms should not be able to say anymore, ‘We didn’t know,’ or ‘We didn’t see them.’ We know that they are there, and we know what it looks like when we see it, and the platforms ought to as well,” she says.

“If you have a rule, you need to apply it consistently.”

Learn more about the Center for Social Media Responsibility and their joint effort with U-M Social Media to encourage online civility and digital literacy, SocialIntegrity.UMich.edu.