Many older Americans rely on people, devices, other strategies to get by 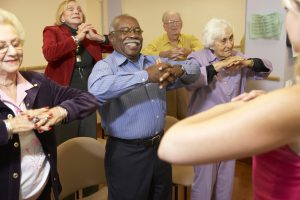 ANN ARBOR— Only about a third of Americans ages 65 and older are fully able to take care of themselves and go about their daily lives completely independently, according to a new study published online in the American Journal of Public Health.

Understanding that there are different ways older adults adapt to disability is a big step in developing public health policies that maximize the quality-of-life for all older Americans, said the study’s lead author, Vicki Freedman, a research professor at the University of Michigan Institute for Social Research (ISR).

The study is the first to provide national estimates of ways the Medicare-age population adapts to limitations in daily life.

“Nearly 80 percent of all older adults find ways to manage on their own without assistance from others,” Freedman said. “The group using devices on their own without difficulty is especially interesting. They seem to be able to participate in activities they enjoy and report well-being as high as those who are fully able to care for themselves.”

The researchers asked about seven activities of daily living: going outside, getting around inside, getting out of bed, eating, getting cleaned up, using the bathroom, and dressing.

During face-to-face interviews, study participants were first asked whether they used devices or environmental modifications including canes, walkers, wheelchairs, scooters, grab bars, and bath/shower seats and whether they received help from another person in the last month.

[quote author=”Vicki Freedman”]Nearly 80 percent of all older adults find ways to manage on their own without assistance from others. The group using devices on their own without difficulty is especially interesting. They seem to be able to participate in activities they enjoy and report well-being as high as those who are fully able to care for themselves.”[/quote]

Then they were asked whether they experienced any difficulty doing any of the activities even when they used modifications, and about whether they had changed how often they performed any basic activities over the last year.

Women are more likely than men to do things on their own by using devices to assist them (26 percent compared to 23 percent). But African Americans and Hispanics are much less likely than whites and Asians to do so. Older adults with low incomes are also less likely to successfully accommodate declines in their functional abilities.

“Two groups that we identified may be especially important targets for public health intervention,” Freedman said. “These are the seven million older adults who have difficulty carrying out activities alone with whatever accommodations they have already made, and the additional 2.1 million who have reduced their activity levels but do not experience or acknowledge that they are having difficulty.”