National study shows marijuana use among U.S. college students remains at highest level in three decades; Heavy marijuana use rising among youth not in college

ANN ARBOR—Marijuana use among U.S. college students and same-age youth not in college in 2017 remained at the highest levels seen in past three decades, according to the most recent findings from the national Monitoring the Future Panel Study. Today’s high levels of marijuana use among the nation’s 19-22 year-olds result from a gradual increase over the past decade.

Tables and figures associated with this story are available here and here. A less detailed summary media release is available here.

In 2017, 38 percent of full-time college students aged 19-22 reported using marijuana at least once in the prior 12 months, and 21 percent reported using at least once in the prior 30 days. Both of these prevalence levels peaked in 2016, the highest found since 1987, and did not change significantly in 2017. The 2017 prevalence levels represent gradual increases since 2006 (when they were 30 and 17 percent, respectively). Same-age high school graduates who are not full-time college students show a similar trend over time, though their use of marijuana tends to be higher; in 2017, their annual prevalence was 41 percent and 30-day prevalence was 28 percent, remaining at highest levels since the 1980s.

Despite these increases, the 2017 levels are still well below the peaks in use found in the early 1980s for college and noncollege youth, when over half in both groups reported marijuana use in the prior 12 months, and over a third reported use in the prior 30 days. (Findings for young adults were first available in the study in 1980.) 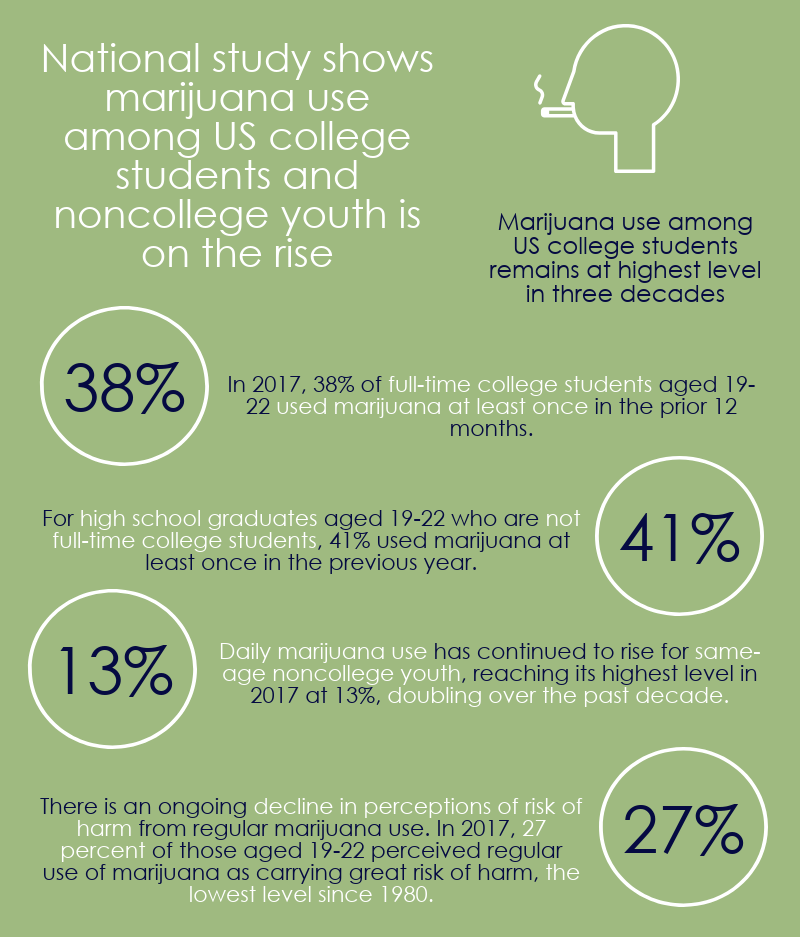 Daily or near daily use of marijuana—defined as having used on 20 or more occasions in the prior 30 days—was at 4.4 percent in 2017 for college students; this has remained steady for the past three years, down from a recent peak of 5.9 percent in 2014. In a rather dramatic contrast, daily marijuana use has continued to rise for same-age noncollege youth, reaching its highest level in 2017 at 13.2 percent, doubling over the past decade (from 6.7 percent in 2006). This gap between college and noncollege youth has widened in the past three years, with daily marijuana use now being three times as high among noncollege youth as among college students.

“The continued increase of daily marijuana use among noncollege youth is especially worrisome,” said John Schulenberg, principal investigator of the Monitoring the Future Panel Study. “The brain is still growing in the early 20s, and the scientific evidence indicates that heavy marijuana use can be detrimental to cognitive functioning and mental health. Getting a foothold on the roles and responsibilities of adulthood may be all the more difficult for these one-in-eight noncollege youth who use marijuana on a daily or near daily basis. As for college students, we know from our research and that of others that heavy marijuana use is associated with poor academic performance and dropping out of college.”

There are multiple reasons for the continuing increase in marijuana use among college students and noncollege youth. One likely reason is the ongoing decline in perceptions of risk of harm from regular marijuana use. In 2017, 27 percent of those aged 19-22 perceived regular use of marijuana as carrying great risk of harm, the lowest level reached since 1980.

“This percentage peaked at 75 percent in 1991, when marijuana use among college students and their non-college age-mates was at historic lows,” said Lloyd Johnston, the original principal investigator of the Monitoring the Future study. “We have consistently seen this inverse relationship between perceptions of risks of harm and actual use, with changes in perceptions of risk typically preceding changes in use.”

These findings come from the annual national Monitoring the Future Panel Study, which has been tracking substance use among American college students and noncollege youth since 1980. It is conducted by a team of research professors at the University of Michigan, funded by the National Institute on Drug Abuse. Results are based on data from college students one to four years beyond high school graduation enrolled full-time in a two- or four-year college in March of the given year, compared with same-age high school graduates not enrolled fulltime in college.

Use of Other Illicit Drugs: No Increases

The 2017 annual prevalence of nonmedical use of prescription narcotic drugs (other than heroin), such as OxyContin and Vicodin, was 3.1 percent for college students and 4.1 percent for noncollege youth, the lowest levels reported since the late 1990s. Prevalence peaked in 2006 for college students (at 8.8 percent) and in 2005 for noncollege youth (at 13 percent), and steadily declined for both groups since then.

Some other drugs never gained much of a foothold on American college campuses, with annual prevalence being near zero. Drugs for which annual use was below 0.5 percent in 2017 among college students included: heroin, ketamine, methamphetamine, crystal methamphetamine (ice), crack cocaine, “bath salts” (a form of synthetic stimulants), and GHB. This was also true among noncollege youth for heroin and GHB; for the other drugs, 2017 annual prevalence was at 1.5 percent or lower.

In general, college males are more likely than college females to use illicit drugs other than marijuana. But in recent years, some of the gender gaps have decreased, especially among less commonly used illicit drugs. An exception in 2017 was that annual prevalence of amphetamines was slightly higher for college females (9.2 percent) than college males (7.7 percent). Among noncollege youth, the use of many illicit drugs other than marijuana is more common among males than females, though in 2017, this was not true for MDMA, cocaine, salvia, OxyContin, Ritalin, and Adderall. Overall, as noted above, with the exception of amphetamines, illicit drug use tends to be lower among college students compared to same-age non-college youth.

Alcohol Use: Still at high levels despite ongoing declines

Over the years, in contrast to the case for the use of marijuana and most other illicit drugs, alcohol use tends to be higher among college students than same-age noncollege youth, though the downward trends over time have been similar for both groups. In 2017, noncollege annual and 30-day prevalence was 72 percent and 56 percent, respectively. It is noteworthy, however, that in high school, college-bound 12th graders are less involved in alcohol (and other substances) than other 12th graders, indicating that the higher levels of alcohol use among college students compared to same-age non-college youth emerges after high school.

For both 12-month and 30-day alcohol use in 2017, male and female college students report similar prevalence, and the same is true for noncollege males and females. This has been the case for many years, with males and females in both groups showing gradual declines.

“There is good and bad news regarding alcohol use among college students. Alcohol use continues to gradually decline, but excessive drinking clearly remains the major substance use problem on campuses,” said Schulenberg. “Having 10 or more drinks in a row, which is happening for one-in-six college males at least once per two-week period, can result in alcohol poisoning, serious accidents, and a host of unwise decisions and dangerous behaviors that adversely affect them and those around them.”

Tobacco Use: Continued Declines for College Students to Record Lows

Cigarette smoking continues to decline gradually among college students, and the cumulative decline over the past 17 years has been dramatic. A peak rate of any smoking in the prior 30 days was reached in 1999 at 30.6 percent. By 2017 prevalence had fallen by almost three-fourths to 7.9 percent, a record low since 1980 when the study began. Daily smoking declined even more, from 19.3 percent in 1999 to 2.0 percent in 2017—a drop of over nine-tenths, also a record low since 1980. This continued decline in college student cigarette smoking corresponds to what has been found among the nation’s middle and high school students, indicating that this ongoing improvement has its source in fewer teens initiating cigarette smoking.

With regard to vaping nicotine, based on new questions added to the surveys in 2017, annual prevalence was lower for college students (13 percent) than noncollege youth (21 percent); this was also true regarding 30-day prevalence (6.0 percent versus 7.9 percent, respectively). In both groups, annual and 30-day prevalence was higher for males than for females.

Use of other forms of tobacco, including using a hookah, small cigars, snus, and dissolvable tobacco also have been decreasing among college students to low levels, as was evident in 2017. In particular, annual hookah prevalence, which peaked in 2014 at 33 percent, declined significantly in 2017 to 10 percent for college students. In general, similar declines in these other forms of tobacco use have been evident among noncollege youth.

“The findings regarding tobacco use continue to be an important part of the good news from our study,” noted Schulenberg. “The new record lows in cigarette smoking among college students, combined with declines in the use of other forms of tobacco suggests that today’s college students have been given the context and tools to increasingly avoid tobacco use, a benefit that will accrue with age.”

The MTF Main Study conducts annual surveys of nationally representative samples of high school seniors; for the MTF Panel Study, random, national subsamples are drawn for follow-up in future years. Of these follow-up respondents, those who are one to four years beyond high school and who report being in a 2-year or 4-year college full-time in March comprise the college student sample each year. They are not drawn from particular colleges or universities, which helps to make the sample more representative of the wide range of two-and four-year institutions of higher education in the country. Same-age noncollege youth are high school graduates one to four years beyond high school not enrolled as full-time college students.

The findings presented here are drawn from Chapters 5, 8 and 9 in this newly published monograph: