ANN ARBOR – News images of immigrants have an effect on some Americans’ attitudes towards immigration, a new University of Michigan study shows. 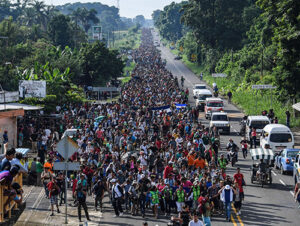 News coverage about immigration has intensified in the last decade, as media outlets often report on Central American migrants—often portrayed in thousands—coming to the Mexico-U.S. border seeking refuge from their home countries. The text and photos used in these stories shape public sentiments.

Guadalupe Madrigal, the study’s lead author and a doctoral candidate in the U-M Department of Communication and Media, along with U-M professor Stuart Soroka, examined how these stories and images are connected to threat perceptions and person positivity.

Madrigal and Soroka conducted an online survey in which respondents randomly read a news story with either an image of immigrants in a crowd setting, an image of an individual immigrant, or a control condition without a story or photo.

Respondents then reported their support for immigration generally, as well as for a range of immigration policies. They also answered questions from the “Trait Fear Scale,” unrelated to immigration. 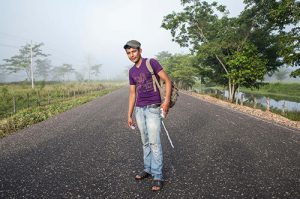 The researchers found that photos affected threat-sensitive respondents’ support for immigration. For this group, viewing immigration in the context of anonymous large groups engages threat, while viewing individual immigrants disengages that sense of threat.

“Amongst threat-sensitive Americans, then, the ways in which media photos capture immigration can make an important difference to attitudes toward immigration,” Madrigal said.

The findings, appearing in the International Journal of Press/Politics, do not suggest that everyone’s attitudes are easily affected by news photos, the researchers say.

“They suggest, rather, that the impact of photos is conditional on other preexisting attitudes and predispositions,” said Soroka, the Michael W. Traugott Collegiate Professor of Communication and Media & Political Science, and research professor in the Center for Political Studies at the Institute for Social Research.

Even so, the researchers say, images can matter for a significant subset of Americans. They found that photos of individual immigrants appear to soften—and even reverse—the negative impact of threat sensitivity on attitudes about immigration.