ANN ARBOR—Confidence fell in September as consumers were more likely to anticipate a slower pace of economic growth, fewer job opportunities and less favorable personal financial prospects, according to the Thomson Reuters/University of Michigan Surveys of Consumers. 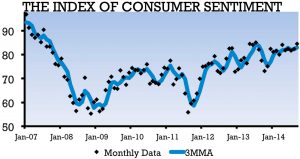 While few consumers expected a federal shutdown, complaints about the economic policies of the government have risen, according to U-M economist Richard Curtin, director of the surveys. Spontaneous negative references to the government’s policies were twice as high as three months ago, although still below the levels recorded during last December’s fiscal cliffhanger. View and download the chart and table (Excel files).

Moreover, despite the unexpected delay in tapering by the Federal Reserve, two-thirds of all consumers expect higher interest rates in the year ahead. Unless “diminished by the dysfunction in D.C.,” confidence is sufficiently positive to support a 2.5 percent growth rate in consumption, Curtin said.

“Although consumers have come to expect the congressional theater that is now playing, they don’t expect the President and Congress to be careless enough to allow a government shutdown due to intransigence on the federal budget and debt ceiling,” he said. “If consumers come to believe a shutdown is probable, it may generate a precautionary response that would significantly slow spending and overall economic growth.

“Although the shock and dismay expressed in 2011 has thus far been absent, the data indicate that consumers are headed back down this negative path. Consumer confidence is fragile enough without this added source of economic uncertainty.”

The personal financial situation of households weakened in September due to more frequent reports of net income declines as well as smaller expected income gains during the year ahead.

Half of all households anticipated no income increase during the year ahead, with the median expected annual change falling to just 0.5 percent, from 0.9 percent last month. Given that the expected increase is smaller than the prevailing inflation rate, the majority of consumers did not anticipate a rising inflation-adjusted income next year and even over the next five years.

Buying plans for vehicles declined in September due to less favorable views of market prices. When asked to describe their views on vehicle buying conditions, just 25 percent mentioned the availability of low and discounted prices in the September survey, down from 34 percent last month, and the smallest proportion in more than 10 years. While home buying and selling conditions remained largely unchanged, the rapid run-up in home prices has slowed. Twice as many homeowners as a year ago, however, reported recent gains in the value of their home.