ANN ARBOR–Consumer confidence edged downward in January, although the overall falloff was minor, according to the Thomson Reuters/University of Michigan Surveys of Consumers.  Conducted by the U-M Institute for Social Research (ISR) since 1946, the Surveys monitor consumer attitudes and expectations. 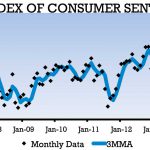 Unfortunately, in the months ahead larger than normal home heating bills caused by the frigid weather will strain budgets across the country, with the greatest negative impact on lower income households, according to U-M economist Richard Curtin, director of the Surveys.  Slowing gains in stock and home values will also curtail the rate of spending growth by upper income households. Vehicle and home sales will continue to improve during the year ahead, although the pace of gains in overall consumer expenditures will slow in 2014 from the exceptional 3.3 percent pace in the 4th quarter of 2013. View and download the chart and table (Excel files).

“Despite the recent economic gains, consumers’ outlook for their finances as well as for the national economy over the longer term have remained more resistant to improvement than in past recoveries,” said Curtin.  “This deeply rooted uncertainty about future economic conditions was first sparked by the Great Recession.  It has been sustained by the growing recognition that no federal policy has yet emerged that will restore long-term economic prosperity anytime soon for the majority of consumers. Optimism about long-term job and income prospects are essential for maintaining high levels of economic motivation.  Too few consumers have regained that optimism.”

[quote author=”Richard Curtin”] Despite the recent economic gains, consumers’ outlook for their finances as well as for the national economy over the longer term have remained more resistant to improvement than in past recoveries. [/quote]

Consumers judged their recent financial progress more favorably in January than at any other time during the past six months.  When asked to explain in their own words how their finances had changed, income increases were mentioned by the highest proportion of consumers since November 2007.  Despite these recent gains, half of all households expected no income increase during the year ahead in the January survey. Just one-in-four consumers in the January survey reported being better off financially than five years ago and expected their financial situation to improve during the next five years.

Consumers were more upbeat about recent economic developments, although most of the gains were reported by upper income households.  Those with incomes in the top third of the income distribution more frequently reported net job gains, while those in the bottom two thirds were more likely to report net job losses.  Confidence in government economic policies remained quite negative, with little difference between income subgroups.

The Sentiment Index was 81.2 in the January 2014 survey, just below the 82.5 in December, but well above last January’s 73.8. The year-to-year gain was more heavily weighted toward how consumers evaluated current conditions rather than future economic prospects. The Expectations Index posted an annual gain of 6.9 percent, half the gain of 13.9 percent recorded by the Current Conditions Index.