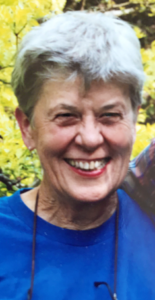 Converse’s work served two very important roles in the field of survey research, according to research professor Michael Traugott of the University of Michigan Institute for Social Research (ISR) and professor emeritus of Communication Studies. “She was a historian, and she wrote the definitive book on survey history in the United States during its formative years, as well as her notable work in questionnaire design. And at the Institute of Social Research, she ran the Detroit Area Study for several years, which was a training mechanism for two generations of social science graduate students where they learned how to conduct surveys in the field, how to interview subjects and analyze data. We’re certainly going to miss her.”

Converse’s extensive recording of the history of survey research in the United States, and what is often referred to as the ultimate text on the subject, “Survey Research in the United States: Roots and Emergence 1890-1960,” was published in 1987. In an ISR interview in 1997, Converse said, “I was concerned that some of the people that I knew in the senior staff were getting along in years and that we didn’t have any archives in the Institute that recorded their perception of the development of the Institute.” She began a scholarly search into the history of ISR, as well as other leading survey research institutions that pioneered the field, including the Bureau of Applied Social Research and the National Opinion Research Center. “Her book is an excellent and comprehensive scholarly treatment of the origin and development of the social science survey,” says Howard Schuman, professor emeritus of sociology and research scientist emeritus at ISR. “It is the best such work I know of, and might well have met the requirements for a doctoral dissertation, with the additional virtue of being extremely well-written.”

Stanley Presser, Converse’s co-author on one of the leading texts on developing questionnaires, “Survey Questions: Handcrafting the Standardized Questionnaire,” and a professor in the sociology department and the Joint Program in Survey Methodology at the University of Maryland, says, “Jean’s elegantly crafted research has stood the test of time. Her magnum opus, ‘Survey Research in the United States’ continues to be the definitive history of the field, and her volume ‘Conversations at Random’ has no rival in helping us appreciate the nature of standardized interviewing.”

As an expert in interviewing techniques, Converse’s work also extended to the Detroit Area Study (DAS) where she was very involved, including serving as Director. Started in 1951, DAS was established at U-M to offer faculty research, graduate student training and useful data about Metro Detroit. Reflecting on the 37th DAS in 1988, Converse wrote: “That DAS continues to survive, and indeed to spawn offspring practica or area studies, is no small tribute to the cohorts of faculty, staff, and students who have nurtured and sustained this unique enterprise over half a century. The DAS also serves as an enduring legacy of the inspiration and efforts of the founders to create a ‘training and research laboratory in the community.’ This success, despite the odds, is a testament to the lasting value of a Detroit Area Study for students at the University of Michigan.”

Reynolds Farley, a principal investigator in the 1976 DAS that analyzed residential segregation in Detroit, worked closely with Converse and also crossed paths with her at ISR while he worked at the Population Studies Center. “I saw how she applied her learnings,” says Farley. “Jean was very interested in how do we conduct survey research correctly and, of course, it involves many different things especially questionnaire design and sample selection. She was very pleasant to work with and extremely helpful to students. It’s a rigorous time going to grad school and trying to write a dissertation and Jean was wonderful to students. She was an unfailingly elegant person. There were times in the academic world, like any bureaucracy, where people can be difficult and quite nasty, and Jean was above that, she didn’t get into personal rivalry. She had a sophisticated elegance.” 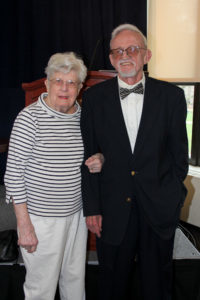 Jean and Phil at the Miller Converse Lecture in 2013.

Converse was born October 21, 1927 in Chicago. In 1951, she married Philip E. Converse, a leading authority on public opinion and electoral behavior, professor emeritus of sociology and political science at U-M, and former ISR director, who passed away in December 2014 at age 86. “Being a social scientist and the spouse of a prominent social scientist is a tricky position,” says Schuman. “But Jean never relied on Phil or his prominence. She took great care to achieve success on her own. We co-authored journal articles together, and I have such great respect and admiration for her as a social scientist. She possessed an unusual writing ability; there was a nice touch to everything she wrote.”

Former teaching fellow for DAS, professor emeritus at U-M, and current Provost of Georgetown University Robert Groves says, “Of course, what struck you first about Jean was her open humanity and pleasant ways. What everyone soon also discovered was that she was as bright and intellectually gifted as they come.”

According to Presser, “Jean sparkled with wit, intelligence, and joy. In working with her, I learned much about how to do research – and respect the respondents on whom the endeavor depends – and simultaneously to have the time of one’s life.”

Converse is survived by her sons, Timothy and Peter, and Peter’s wife Maureen and children Edward “Ned” and Erin.

A memorial is being planned for Saturday, May 19, 2018 at 2:00 pm at the Ann Arbor Friends Meeting (1420 Hill Street, Ann Arbor, Mich.). Memorial donations may be made to the American Friends Service Committee or to the Philip Converse and Warren Miller Fellowship in American Political Behavior at ISR.