The economic legacy of the Great Migration

ANN ARBOR—When black Americans migrated out of the South in the 1930s and ’40s, their children benefited by leaps and bounds, according to a University of Michigan study using U.S. Census data.

Compared to a group that did not leave the South, the children of families who left the South graduated from high school at a rate 11 percent higher than their counterparts, made about $1,000 more per year in 2017 dollars and were 11 percent less likely to be in poverty.

The study, which was published in the journal, Demography, was the first to link parents’ 1940 data to their offspring through the U.S. Census. The study authors were U-M Institute for Social Research scientists Catherine Massey and J. Trent Alexander, in collaboration with Stewart Tolnay and Christine Leibbrand at the University of Washington. 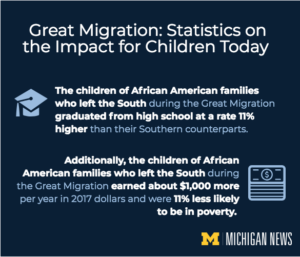 “These parents had mixed experiences. They had higher incarceration rates, but also higher incomes and more economic opportunities,” said Massey, an assistant research scientist at the Population Studies Center. “Our question was how this benefit transmits to children.”

For this study, researchers divvied up the country into two parts: the South and the “non-South.” The South includes 17 southern states such as Florida, Alabama, Mississippi and the Carolinas, and the non-South the rest of the country, including states such as Wisconsin and California. Still, industrial cities such as Chicago, Pittsburgh, New York, Detroit and Philadelphia saw the lion’s share of these migrants.

In this research, Massey and Alexander identified migrants living with their children in 1940, and followed those children through to the long-form Census in 2000, when they were mostly retirement age.

Part of the children’s gains can be attributed to the ambition of their parents. People who were able to make a cross-country move had characteristics that make success more attainable: These parents in particular made more and had higher levels of education than the Southern stayers. Massey and Alexander needed to control for these factors.

The statistics — that children of southern migrants graduate at a rate 11 percent higher than children who stay in the South and had higher incomes — were after controlling for parental characteristics. Before this control, the migrants’ children were between 30 and 48 percent more likely to graduate high school.

“What’s really clear is that a lot of these benefits happened because these parents are self-selecting — they are from a higher portion of the income and education distribution,” Massey said. “But even after we controlled for a parent’s education, occupation and income, we’re still finding these large gains. That suggests that there may be something about the opportunities in the North that they were benefiting from.”

“If we had just studied the children of movers, we might have concluded that the children of the Great Migration were extraordinarily successful,” said Alexander, who is a research professor at the Inter-university Consortium for Political and Social Research. “But knowing the parents were self-selecting, and controlling for that, allowed us to temper what would have been an extraordinary finding.”

Massey and Alexander hope that creating this set of data that links Census data will generate other compelling research. The data was made available from the Census Bureau via the Federal Statistical Research Data Centers and provided a new source of information for understanding population dynamics across the entire span of the 20th century.

“This is the first research that uses linked 1940 and 2000 Census data to study a population over time,” Alexander said. “I think this will be an important multipurpose data resource.”