The weight of racism: Daily onslaught of ‘vigilance’ affects health of black women

There’s a difference between discrimination and vigilance, says Margaret Hicken, director of the U-M RacismLab. Discrimination entails day-to-day instances of prejudice whereas vigilance is a never-ending, daily anticipation of discrimination or prejudice.

“Because you know or have heard of Trayvon Martin, you know when you go out, you need to make sure that you are not wearing a hoodie or that you don’t walk in certain areas,” said Hicken, also a research assistant professor at the U-M Institute for Social Research Survey Research Center. “Similarly, you have heard of friends or family who have been pulled over for traffic stops, so you know when you go out driving, your tags have to be up to date, or that you have your license on the seat and you don’t have to reach into the glove compartment.”

Using data from the Chicago Community Adult Health Study which surveyed 3,105 adults age 18 and older, Hicken and her fellow researchers examined the levels of discrimination and vigilance among black and white women, and how those measures correlated to body mass index and waist circumference. Waist circumference in particular, the researchers say, is an important risk factor for chronic diseases such as cardiovascular disease and diabetes. 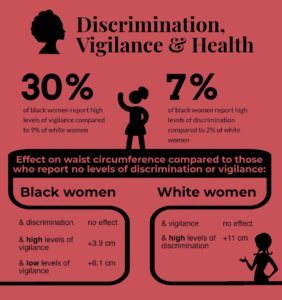 But why the effect in particular on waist circumference? Previous research has shown that chronic stress may play an important role in obesity inequalities. Some research shows that eating high-calorie, high-saturated fat foods in response to stress results in the release of chemicals that reduce feelings of stress. Psychosocial stress also alters metabolism, which changes the way fat is deposited in the body—often concentrating it around the middle.

“If we live in a society where one group is stigmatized so that you have to take these preventive measures chronically, differences in the way these groups of women internalize discrimination and vigilance become apparent,” Hicken said.

There are only a handful of studies that examine how psychosocial stress and racial inequality impact obesity or other weight-related measures of health, say the study’s authors.

Next, the researchers plan to study how vigilance affects immigrant communities, including North African and Muslim Americans as well as Latino immigrants.