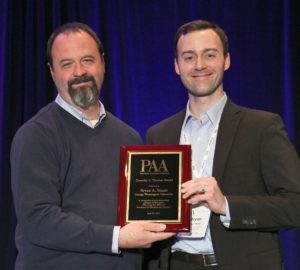 “We are very proud that a graduate of the University of Michigan’s economic demography training program, run jointly by ISR’s Population Studies Center and the Department of Economics, has won this distinguished award for each of the last four years,” says David Lam, ISR Director. “It is a great reflection on our students, on the dedicated faculty and staff involved in the program, and on the unique resources that our program provides for studying the relationship between economics and demography.”

The Dorothy Thomas Award recognizes the best graduate student paper on the interrelationships among social, economic and demographic variables. Stuart won the award for his paper “The Long-Run Effects of Recessions on Education and Income.”

“Bryan’s outstanding paper provides some of the most convincing evidence to date of the long-term negative consequences for education and income of being born during a recession,” says Lam. Stuart studied at PSC from 2012-2017 where his research interests included labor, public and urban economics, and economic history. His work examined the long-run effects of recessions on education and income, the role of birth town migration networks in historical U.S. mass migration episodes, and the role of social connectedness in reducing crime in U.S. cities.

“It’s a real honor to receive this award,” says Stuart. “I’m especially grateful to the faculty, staff and students at the University of Michigan and ISR for creating such a tremendous research environment.”

Stuart received his PhD in 2017 from U-M and his dissertation is entitled “’Essays on the Economics of People and Places.” Stuart’s dissertation committee included Martha J. Bailey (chair), John Bound, John DiNardo and Dominick Bartelme. Stuart also holds a master’s degree in economics from U-M and a bachelor’s degree from Indiana University. He currently works as an assistant professor at George Washington University, Department of Economics.