ANN ARBOR—The University of Michigan has released a report that details the value of a college degree with data on how much its graduates earn over time.

The report includes information on earnings from more than 100 undergraduate, graduate and professional degree programs across U-M’s 19 schools and colleges one, five and 10 years after graduating.

With this pilot project, a partnership between the University of Michigan, the Institute for Research on Innovation and Science (IRIS) and the U.S. Census Bureau, U-M’s goal is to respond to calls for greater transparency in higher education by providing new, detailed information on this important outcome for students and families. The project also creates a platform for research that will support evidence-based efforts to improve teaching and learning at U-M and on other campuses across the country.

“The promise of this platform is that it allows us to better understand, explain and hopefully improve the value of the educational work universities do for students and for society,” said Jason Owen-Smith, professor of sociology and executive director of IRIS, a consortium of research universities based at U-M’s Institute for Social Research.

“More remains to be done, but the results will benefit our institution, students, their families, employers and the nation.”

The data are available on the U.S. Census Bureau’s website, and include median, 75th percentile and 25th percentile income levels for U-M alumni. The data being released today represent actual privacy protected earnings. 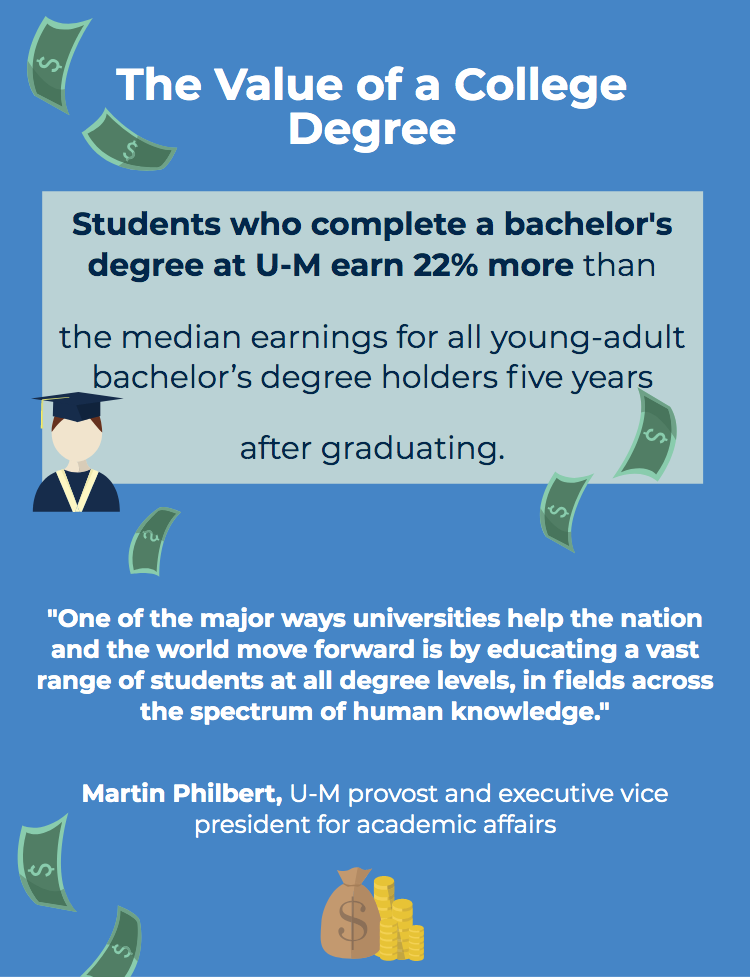 “One of the major ways universities help the nation and the world move forward is by educating a vast range of students at all degree levels, in fields across the spectrum of human knowledge,” said Martin Philbert, U-M provost and executive vice president for academic affairs. “This analysis an important step toward really understanding the ways in which educational pathways and careers through higher education yield both personal success and broader social benefit.”

The project tracks student earnings through a partnership between IRIS and the U.S. Census Bureau’s Post-Secondary Employment Outcomes project. Earnings data are based on unemployment-insurance information from all 50 states, which the Census Bureau uses to build the Longitudinal Employer Household Dynamics dataset. That dataset contains information on wage payments from establishments to workers across the nation.

The researchers at U-M and the Census Bureau connected basic data about each student and degree granted to them by U-M over about a 15-year period and linked it with national earnings data using an anonymized identifier. The data that are being released are protected by disclosure avoidance methods implemented by the Census Bureau, which protect individual privacy by preventing the re-identification of any students represented in the data.

About 54% of U-M bachelor’s graduates were found in the Census Bureau’s earnings data. Those who hold jobs outside the U.S., who work in jobs that are not eligible for unemployment insurance, and those who are out of the workforce for whatever reason are not covered in these results.