ANN ARBOR – ANN ARBOR—Gun violence leads to tens of thousands of deaths or injuries every year in the United States, and there’s a growing commitment to figuring out what’s working to prevent or reduce such incidents—and bolster those efforts.

The University of Michigan has become a hub of related, diverse scholarly activity. Among the latest developments: The U.S. Centers for Disease Control and Prevention has awarded $6 million to the school to support Michigan Youth Violence Prevention researchers working with communities on innovative projects, and U-M’s Economics Department will get part of a $1.9 million grant from the National Institutes of Health to evaluate a separate program to predict and prevent gun violence in Chicago.

These announcements follow a separate, $10 million U-M commitment to launch an Institute for Firearm Injury Prevention. 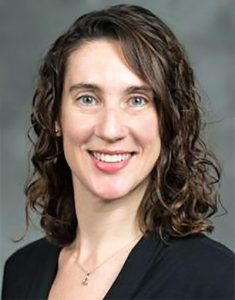 She has explored two distinct threads of research: the role of summer jobs at reducing youth violence more generally, and efforts more specifically targeted at shootings. Heller, who is part of the Chicago gun violence project, discusses her work, its impact and the apparent reckoning of this societal and public health crisis.

There’s a great deal of focus right now on gun violence and millions of dollars in public money to support research. As admirable and necessary as it is, what’s leading to all of this attention right now?

Despite the fact that the homicide rate was at a 30-year low a few years ago, the country has seen increasing homicides since then, including the biggest one-year jump on record in 2020. And 2021 shows no signs of slowing down. So the toll gun violence takes on individuals, families and communities is particularly salient at the moment.

On top of that, gun violence disproportionately affects families and communities of color. So the ongoing public conversations about racial justice also help draw attention to the inequalities in the burden of gun violence. For example, the homicide rate for young Black men is 24 times higher than that of their white counterparts.

Even the federal government has responded, making $25 million in gun violence prevention funding available after several decades of basically funding no gun-related research.

There are so many components to reducing gun violence, including steps and actions that might not be obvious on the surface. Your work has shown that summer youth job programs can reduce violent crime even after they have ended. Can you explain the connection, particularly over time?

Often people think about summer youth employment programs as being primarily about employment—helping youth onto better labor market trajectories. In fact, they don’t seem to do that, at least not on average. But there are a number of studies now, mine included, that suggest the thing these programs do most consistently is reduce criminal justice contact, including arrests for violent crimes, and even, potentially, mortality.

Importantly, this is not just a question of keeping young people busy over the summer; the decline in crime continues during the year after the summer of the program. So youth are learning something from the program that they are taking with them that changes their future behavior.

What exactly that is isn’t something we know for sure. It could be self-regulation skills; it could be beliefs about yourself or your future; it could be changes in time use or peers; or it could be just from the increase in income. But regardless of the mechanism, it’s a remarkably consistent effect across studies. And I have a recent paper that suggests it’s the young people at highest risk of socially costly outcomes that seem to benefit the most.

You have pointed out that such programs often are cut or scaled back when cities need to trim budgets. But there are also economic and social cases to be made for keeping them. What does your research show?

In terms of my summer jobs research, it shows that these programs consistently reduce criminal justice contact, including arrests for violent crimes by a lot—on the order of 30%-50% in the year after the program. And that the biggest benefits come from serving the people who face the largest challenges, who would otherwise be at the highest risk of crime and other socially costly outcomes. So that has important implications not just for the utility of continuing these programs, but also for how to get the biggest benefits from limited resources.

On the other hand, people sometimes look at the reduction of violence and think that summer jobs should be the solution to ALL violence. I don’t think that’s quite right. If you look at the population that’s at the very highest level of risk for being involved in a shooting—either as an offender or a victim—that’s not the population that applies to and shows up for summer jobs programs. That population is much more disconnected and faces really enormous barriers to engaging in social programming. So if governments are really focused on shootings rather than violence more generally, they likely need to think about programs that are more intensive (and more costly) than summer jobs.

I’m working on evaluating one such program in Chicago, the Rapid Employment and Development Initiative (READI Chicago). READI aims to identify the adult men at the highest risk of shooting involvement, sends outreach workers to do what they call “relentless engagement,” and then get them into a program that provides an 18-month supported job along with cognitive behavioral therapy and other social support. So that’s much more intensive than a 6-8 week summer job.

The program is still in the field, so we don’t have final results on offending or victimization yet. And we just got an NIH grant to extend our follow-up period as well as look at other health-related outcomes, so it will be quite some time before we have the full picture of results. But even at this point, we’re showing how it’s possible to identify, recruit and retain this population, as well as a lot about the kinds of barriers this group—who is rarely served by any institution other than the police—faces.

It’s implausible that summer jobs could be the solution for them. So I think it’s important for policymakers to think carefully about what outcomes they are trying to address among what population, and make their spending decisions in a way that makes sure their investments are targeting the thing they most want to affect.