Gerald (Jerry) Gurin, a professor and research scientist at the University of Michigan throughout his career, died on January 20, 2019 at the age of 96.

Jerry was raised in the Bronx as the third child of Russian-Jewish immigrants Morris and Sarah Gurin. He grew up with siblings Ann, Arnie, and Gloria, and a close extended family with strong social and cultural Jewish values. From his youth onward, he was an avid theatergoer and sports fan and a lifelong New Deal Democrat. After receiving his B.S.S. from New York’s City College in 1943, Jerry served with the Army in France. After the War, he received an M.A. from Columbia University and then joined the University of Michigan’s brand new social psychology graduate program. He met and married Maizie Gurin, a clinical psychologist and the mother of his son Joel; they were married for eight years before divorcing. He became part of Michigan’s new Survey Research Center and a founding survey director of the Institute for Social Research (ISR), and received his Ph.D. in 1956.

Jerry’s first major research project was a study of the 1952 election, “The Voter Decides.” This groundbreaking study used new sampling methods to predict elections more accurately and developed the concept of party identification. Jerry maintained a strong lifelong interest in politics and public opinion on contemporary issues. He also led the study published in 1960 as “Americans View Their Mental Health,” commissioned by Congress to assess the growing need for psychiatric resources in the U.S. “Jerry’s book is a seminal, foundational work that helped set the direction of U.S. mental health policy for decades,” says Dr. Harold “Woody” Neighbors, C.S. Mott Endowed Professor of Public Health at Michigan State University. “It was a paradigm shift, studying the private, inner psychological lives of individuals.” 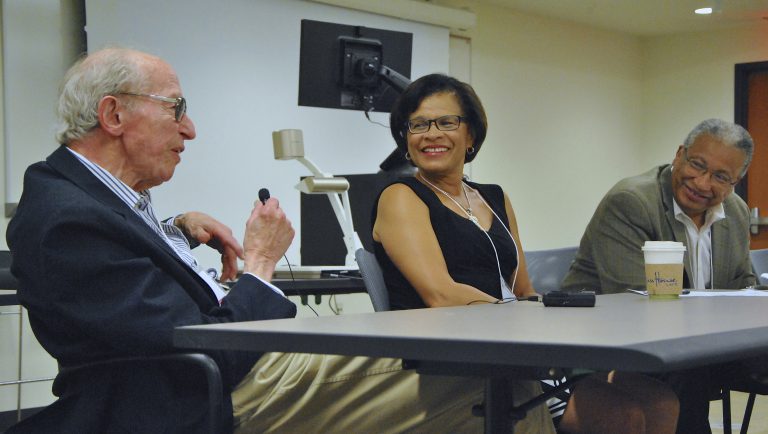 In the 1970s, Jerry worked with his wife Patricia (now Michigan’s Nancy Cantor Distinguished University Professor Emerita of Psychology and Women’s Studies) on studies that led to the Program for Research on Black Americans (PRBA). Growing out of the pioneering work of Patricia and Gerry in establishing a program of research directed toward providing opportunities for recent arrivals of large cohorts of Black graduate students, in the mid-70s the Survey Research Center and Research Center for Group Dynamics made a modest investment in exploring the possibility of launching a National Survey of the African American population. Jerry joined this effort as a senior adviser and in rapid order became a full collaborator and mentor to the relatively young faculty and graduate students working on the fledgling project. His grant and research experience was an indispensable aspect of writing applications, receiving funding, designing questionnaires, and executing the sampling and field work on the first National Survey of Black Americans in 1979-1980; and the nearly 17 local, national, and international surveys that followed over the next 40 years. “Jerry’s experience was indispensable to the first National Survey of Black Americans in 1979-1980 and many surveys that followed,” recalls Dr. James Jackson, Daniel Katz Distinguished University Professor of Psychology. “Without his guidance, experience, and dedication, the successful PRBA would not have existed.”

Jerry officially retired in 1993 as Professor of Higher Education in the School of Education, and Research Scientist at ISR’s Survey Research Center. At that time he was the Principal Investigator of the Michigan Student Study (MSS) within the Office of Academic Multicultural Initiatives (OAMI), and he continued work on the MSS until his “re-retirement” at age 92. “Jerry was a mainstay of encouragement, support, and wisdom to the young professionals in the OAMI office,” says Dr. Katrina Wade-Golden, Deputy Chief Diversity Officer for the University’s Office of Diversity, Equity & Inclusion. The MSS helped shape national debate on the educational benefits of diversity and supported the University’s successful defense of its affirmative action programs before the U.S. Supreme Court.

Jerry’s many family, friends, students, and colleagues remember him with love, gratitude, and admiration. He was both brilliant and wise, and remarkably kind, supportive, thoughtful, accepting, and engaged in the lives of his loved ones. For three of his grandchildren who lived with Jerry and Pat for years Chloe, Bryan, and Brooklyn, Jerry played an especially important role in their upbringing and their lives. Jerry embodied “tikkun olam,” the Jewish call to heal the world. He became an advocate for racial equity and the proud patriarch of a multiracial family. He had a strong sense of justice, and he combined realism about the state of the world with optimism and hope for the future. For everyone who knew him, loved him, and will miss him deeply, Jerry Gurin made the world a much better place.

He is survived by his wife of 54 years, Patricia Gurin; his son and daughter-in-law, Joel and Carol Gurin; his daughter and son-in-law, Jennifer and Bob Freeman; his sister, Gloria Ross; his grandchildren, Alison Gurin, Joanna Gurin, Chloe Gurin-Sands, Benjamin Gurin, Bryan Dameron, and Brooklyn Freeman; and the extended Gurin-Levey-Ross family. His daughter Sarah Rebekah Gurin pre-deceased him in 1997.

A memorial service for Jerry will be held from 10 am to 1 pm in the Michigan League Ballroom in Ann Arbor on Sunday, May 12. The family asks that contributions in Jerry’s memory be sent to J Street, Jews for Racial & Economic Justice, or the University of Michigan Program on Intergroup Relations.