In keeping with the 2019 “Unravel” theme for the U-M Reverend Dr. Martin Luther King Jr. Symposium, part one of the “Unravel Injustice: Taking Action” discussion investigated (or unraveled) our roles as citizens in movements to create a more just and humanistic society. The keynote address opened when john a. powell shared a family tradition with the attending scholars, students, and community members: he played Stevie Wonder’s “Happy Birthday to You” in honor of Martin Luther King, Jr’s birthday. His personable, inclusive talk explored W.E.B. Dubois’ concepts of “othering and belonging,” which Dr. powell asserts are a serious problem for the twenty-first century. Dr. powell stated that while violence against the “other” is nothing new in human civilization, it is particularly pernicious in the current global and political environment. Dr. powell believes that the nation-state, with its inherent “othering,” is not the vehicle that will lead us into a society of belonging.

Dr. powell made clear that “othering” is particularly harmful now because democracy is an extreme exception: only five percent of the global population live in a full democracy. He explained the increase of ethnic nationalism in this global, political situation is bound up with the concepts of “bridging” versus “breaking” in response to our increasing collective anxiety due to rapid changes in globalization, technology, environment, and demographics.

After showing the video above, Dr. powell went on to unravel the complexity of “othering and belonging,” and how the process of defining who we are is also a delineation of who we are not. He points out that the lines drawn to delineate the “other” based on sexual orientation, national origin, religion, or race are inherently dehumanizing. He advocates for the “belonging” response which includes the concept that all humans and all forms of life are worthy and valuable. Powell pointed out merely stating that ‘we are all the same’ is not an adequate response and will not open the fabric of society to include a bigger version of us.

As the panel discussion opened Dr. powell, Nick Licata, Rosalie Lochner, Jessyca Matthews, and Kayla Reed each told their narratives about the call to action that started them on the path of activism. The moderator, Neda Ulaby, also asked each panelist to discuss the best advice they could give the attendees about how to take action to unravel injustice. The audience had the opportunity to engage with these citizen-activists, and to hear very personal stories that transformed each of the panel members from mere citizens to activists. 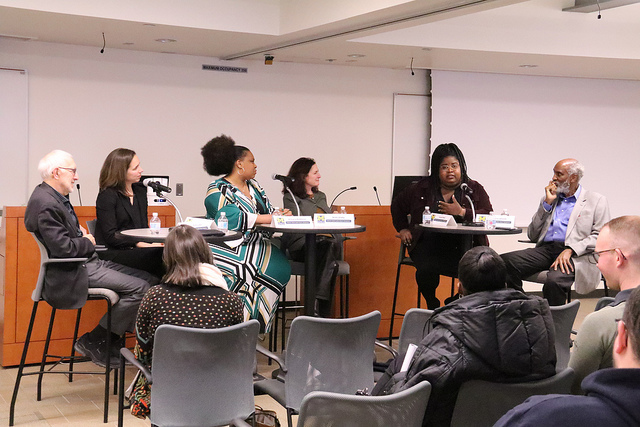 If you did not have the opportunity to attend part one of “Unraveling Injustice: Taking Action,” a video recording will be available soon.

Photos from the event are available on ISR’s Flickr page.

After the keynote and brief panel presentations, each of the speakers will lead a round table discussion, facilitated by ISR’s RacismLab members, on how we can integrate action for equality into our roles as researchers and educators. Round table discussion participation is limited and available through sign up. If you would like to participate, please sign up on this Google Form.