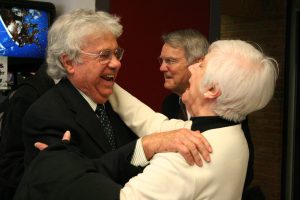 The lecture, a panel discussion on public opinion and political action moderated by Nancy Burns, director of the ISR Center for Political Studies, attracted political science faculty and alumni from around the country.  It was part of the Centennial celebration for the U-M Department of Political Science.  A series of panel discussions and a lunch at the Michigan Union preceded the Miller Converse event. All events were inspired by the Centennial celebration theme: What’s worth doing and why?

The annual Miller Converse Lecture is the University of Michigan’s preeminent lecture series on American Electoral Politics. The Series honors the legacy of Center for Political Studies (CPS) Founder Warren Miller and former CPS Director Philip Converse, who is also a former director of ISR.