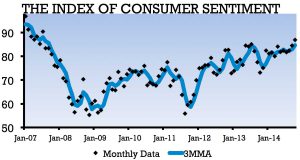 ANN ARBOR—Confidence plunged in December as consumers confronted the rising likelihood that political gridlock would push the country over the fiscal cliff. Consumers were more pessimistic about their future finances, and more pessimistic about the outlook for the overall economy and job prospects, according to University of Michigan economist Richard Curtin, director of the Thomson Reuters/University of Michigan Surveys of Consumers.

One-in-four consumers spontaneously mentioned hearing about prospects for higher taxes when asked to identify what economic news they had heard, the highest level ever recorded.  While the Sentiment Index is still well above the August 2011 low associated with the Congressional debate on taxes, spending and the deficit, if no resolution is reached the falloff could easily worsen in the weeks ahead, Curtin predicted. Discounted prices and record low interest rates have forestalled declines in buying attitudes but consumers are likely to reduce purchases if income or payroll taxes increase in 2013. View and download the chart and table (Excel files).

“Confidence is lost much more easily than it can be regained, and the pessimism created by not reaching a resolution before year-end will be difficult to reverse even if a settlement is reached soon after the start of 2013,” said Curtin.  “Blaming one side or the other for failure will only increase pessimism as it reflects a dysfunctional system for setting economic policy.  Moreover, the details of the settlement matter, as it is hard to imagine a positive reaction if it did not include the extension of the payroll tax cut. While tax hikes on top incomes will result in spending declines, ending the payroll tax holiday will result in significant losses in confidence and spending.”

Personal financial expectations fell to their lowest level in a year.  Financial gains were expected by just one in four households in December; the majority anticipated no income increase. Even though consumers expected a low inflation rate, the majority nonetheless expected a declining inflation-adjusted income in the year ahead.

Consumers anticipated at least a slowdown in economic growth. They more frequently expected a downturn during the year ahead without a resolution to the fiscal cliff. Just one-third of all consumers expected an uninterrupted expansion over the next five years. The proportion that expected a rising unemployment rate during the year ahead jumped to 35 percent in December, up from 19 percent in October, and the highest level since the summer of 2011.

The Surveys of Consumers is a rotating panel survey based on a nationally representative sample that gives each household in the coterminous U.S. an equal probability of being selected.  Interviews are conducted throughout the month by telephone. The minimum monthly change required for significance at the 95% level in the Sentiment Index is 4.8 points; for Current and Expectations Index the minimum is 6.0 points.