Consumer resilience due to job growth

ANN ARBOR—Consumer sentiment remained at very favorable levels, according to the latest University of Michigan Surveys of Consumers.

The Sentiment Index has been higher thus far in 2018 (98.5) than in any prior year since 2000, which was the last year of the longest expansion since the mid-1800s, said U-M economist Richard Curtin, director of the surveys.

Moreover, stock price declines, rising inflation and interest rates, and the negative mid-term election campaigns, have not acted to undermine consumer confidence, he said. Needless to say, consumers are not immune to these factors. The data only indicate that the tipping point toward escalating pessimism has not been reached by the close of interviewing.

Overall, the latest data indicate that real consumer spending will advance at a 2.6-percent pace in the second half of 2018 to the first half of 2019.

“Consumer resilience in the face of negative news has primarily been due to widespread optimism about future job growth,” Curtin said. “Consumers were confident that the economy would maintain robust job growth in the year ahead, despite the expectation that overall wage growth would remain dismal. 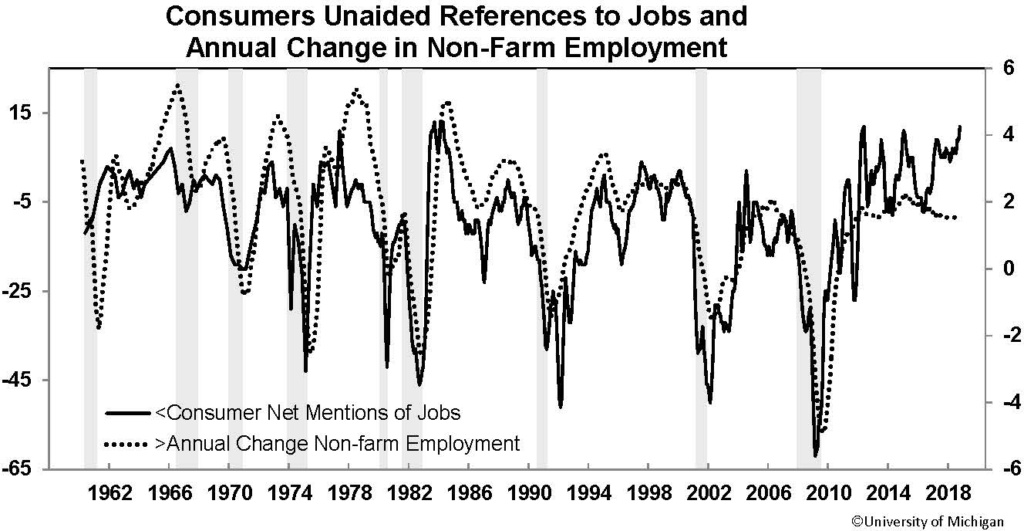 “Consumers now place a higher value on job security compared with wage growth due to job losses associated with the Great Recession, as well as the aging of the labor force. This sense of confidence in the security of their jobs has bolstered discretionary spending decisions, although rising prices and interest rates for homes and vehicles will result in a slowing pace of sales during the year ahead.”

Although consumers continued to favorably judge both their current and expected finances, both were slightly less favorable in October. The proportion that reported recent financial gains fell to 52 percent, down from last month’s 56 percent.

When asked about their financial prospects for the year ahead, 40 percent expected gains, down from last month’s 44 percent. Rising inflation expectations were accompanied by a decline in the size of nominal income gains expected during the year ahead, which fell to 1.8 percent in October, down from 2.1 percent in the prior month.

Consumers’ views of buying conditions for vehicles and homes were less positive in the October 2018 survey. Low and attractive pricing for new vehicles was cited by just 17 percent in October, tied with August, and the fewest positive price references since 1984.

favorable in a decade. Overall, vehicle and home buying conditions have declined by nearly 20 percent since their peak at the start of 2015. Importantly, the remaining strength in home and vehicle buying is due to greater certainty about jobs and incomes.

The Surveys of Consumers is a rotating panel survey based on a nationally representative sample that gives each household in the coterminous U.S. an equal probability of being selected. Interviews are conducted throughout the month by telephone. The minimum monthly change required for significance at the 95-percent level in the Sentiment Index is 4.8 points; for Current and Expectations Index the minimum is 6 points.