Fractions are the key to math success, new study shows 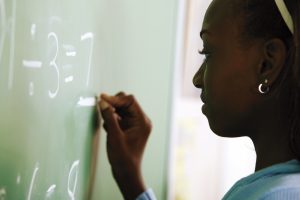 ANN ARBOR, Mich.—What part of math success comes from knowing fractions? More than you might think, according to a new study that analyzed long-term data on more than 4,000 children from both the United States and the United Kingdom.

Published in the current issue of the peer-reviewed journal Psychological Science, the study found that understanding fractions and division at age 10 predicted algebra and overall math achievement in high school, even after statistically controlling for a wide range of factors including parents’ education and income, and children’s age, gender, I.Q., reading comprehension, working memory, and knowledge of whole number addition, subtraction and multiplication.

“These findings demonstrate an immediate need to improve the teaching and learning of fractions and division,” said University of Michigan researcher Pamela Davis-Kean, a co-author of the study and director of the Center for the Analysis of Pathways from Childhood to Adulthood at the U-M Institute for Social Research.

“We suspected that early knowledge in these areas was absolutely crucial to later learning of more advanced mathematics, but did not have any evidence until now,” said Robert Siegler, a cognitive psychologist at Carnegie Mellon University and the lead author of the study.

“The clear message is that we need to improve instruction in long division and fractions, which will require helping teachers to gain a deeper understanding of the concepts that underlie these mathematical operations. At present, many teachers lack this understanding. Because mastery of fractions, ratios and proportions is necessary in a high percentage of contemporary occupations, we need to start making these improvements now.”

From factory workers to Wall Street bankers, a reasonable proficiency in math is a crucial requirement for most well-paying jobs in a modern economy. Yet, over the past 30 years, mathematics achievement of U.S. high school students has remained stagnant—and significantly behind many other countries, including China, Japan, Finland, the Netherlands and Canada.

“These findings demonstrate an immediate need to improve the teaching and learning of fractions and division.”

The research was supported by a grant to the Center for the Analysis of Pathways from Childhood Adulthood by the National Science Foundation.

For the study, the team examined two nationally representative data sets, one from the U.K. and one from the U.S.—the Panel Study of Income Dynamics, conducted at the U-M Institute for Social Research since 1968. The data from the Panel Study of Income Dynamics included 599 children who were tested in 1997 as 10-to-12-year-olds and again in 2002 as 15-to-17-year-olds. The data from the U.K. included 3,677 children who were tested in 1980 as 10-year-olds and in 1986 as 16-year-olds. The importance of fractions and division for long-term mathematics learning was evident in both data sets, despite the data being collected in two different countries almost 20 years apart.

“This research is a good demonstration of what collaborations between psychologists, economists, public policy analysts and education scientists can create,” said Davis-Kean, who is an associate professor of psychology at the U-M College of Literature, Science and the Arts and an associate research professor at ISR. “Instead of relying on results from a single study, this study replicates findings across two national data sets in two different countries, which strengthens our confidence in the results.”

The U-M Center for the Analysis of Pathways from Childhood through Adulthood brings together researchers from around the world to identify specific factors that influence children’s academic achievement, social relations, mental health and eventual life success. Funded by the National Science Foundation, CAPCA applies cutting-edge analytic methods and statistical approaches to a broad range of longitudinal studies with the aim of creating effective interventions to help families, schools and community organizations help children develop into happy, productive adults. For more information, visit the CAPCA website at: http://rcgd.isr.umich.edu/capca.

Established in 1949, the University of Michigan Institute for Social Research is the world’s largest academic social science survey and research organization, and a world leader in developing and applying social science methodology, and in educating researchers and students from around the world. ISR conducts some of the most widely cited studies in the nation, including the Thomson Reuters/University of Michigan Surveys of Consumers, the American National Election Studies, the Monitoring the Future Study, the Panel Study of Income Dynamics, the Health and Retirement Study, the Columbia County Longitudinal Study and the National Survey of Black Americans. ISR researchers also collaborate with social scientists in more than 60 nations on the World Values Surveys and other projects, and the institute has established formal ties with universities in Poland, China and South Africa. ISR is also home to the Inter-University Consortium for Political and Social Research, the world’s largest digital social science data archive. For more information, visit the ISR website at www.isr.umich.edu.