Global forest restoration and the importance of empowering local communities

ANN ARBOR— Forest restoration is a crucial element in strategies to mitigate climate change and conserve global biodiversity in the coming decades, and much of the focus is on formerly tree-covered lands in the tropics.

Just and equitable implementation of restoration projects will require that communities be empowered to manage and use local forests, according to the authors of the study published in the journal Nature Ecology & Evolution. Community management of forest areas includes the rights to access the forests, withdraw forest resources, and manage lands for community benefit.

“We argue that the success of global forest restoration critically depends on prioritizing local communities,” said study lead author James Erbaugh of Dartmouth College, who earned a doctorate from the University of Michigan School for Environment and Sustainability.

“Empowering local communities to restore forests can provide human well-being benefits to millions of the most deprived and marginalized people, as well as environmental benefits for all.”

Study co-authors include SEAS professor Arun Agrawal, as well as other current and former graduate students and postdoctoral researchers at the U-M school.

Their analysis examines the overlap between opportunities for tropical forest restoration, human populations, development and national policies for community forest ownership. The researchers focused on the opportunities in tropical countries because of the potential there for removing atmospheric carbon, promoting biodiversity conservation and contributing to the well-being of local residents.

For the study, the researchers combined two datasets: one that classifies forest restoration opportunities using demographic, geographic and land-cover data, and another that uses estimates from a land-change model to predict carbon removal from forest restoration.

Brazil, the Democratic Republic of the Congo, India and Indonesia have the greatest number of people living in or near forest restoration opportunity areas with the greatest potential to remove heat-trapping carbon dioxide from the atmosphere and sequester it in forests, according to the study.

Within low-income countries in the tropics, 12% of the population lives in forest restoration opportunity areas, a finding that highlights the potential for improving the livelihood and well-being of millions of people who are often underserved by standard investments in infrastructure and development, according to the authors.

Nighttime satellite images showing the brightness and extent of artificial lighting on the Earth’s surface can be used as a proxy for multiple development indicators. In the current study, areas in low-income nations with the least nighttime light radiance and the greatest carbon-removal potential indicated the places where forest restoration projects might best complement sustainable development agendas.

“There are many opportunities in central, eastern and southern Africa to restore forests and provide socioeconomic and infrastructure benefits to local people facing many multidimensional deprivations,” said U-M’s Agrawal, who is also editor-in-chief of the journal World Development.

On the other hand, denying decision-making powers to affected locals could pose serious ethical problems, especially if some of those individuals are displaced by forest-restoration projects designed to help mitigate human-caused climate change and preserve biodiversity.

Such exclusion would force some of the most multidimensionally poor people—those who live in rural areas within low-income countries—to move or give up their current livelihood for a global carbon and biodiversity debt to which they contributed little, according to the researchers.

And while local communities should be empowered to manage forests for restoration, opportunities to expand community forest ownership must also be explored, they say..

Most of the forest restoration opportunity areas analyzed in the study are in countries with preexisting legal frameworks for community forest ownership, which represents a stronger set of resource rights than community forest management.

Continued efforts to expand community forest ownership are especially important in countries with a substantial proportion of people living in forest restoration opportunity areas, such as the Central African Republic, the Democratic Republic of the Congo, Thailand and the Lao People’s Democratic Republic.

Forest restoration projects in the tropics involve planting trees on land previously cleared for agriculture, timber harvesting or other purposes. Increasing support for such efforts is becoming available from both government agencies and nongovernmental organizations, Agrawal says.

The authors of the Nature Ecology & Evolution paper support the use of a landscape planning and management tool called forest landscape restoration, or FLR, as a way to include local communities in forest-restoration projects in the tropics. FLR “aims to restore ecological integrity and enhance human well-being on deforested and degraded lands through the inclusion and engagement of local stakeholders,” according to the researchers.

Proponents of FLR say it contributes to human well-being through the use and sale of forest products, that it promotes increases in local food and water security, and that it respects diverse cultural values that local peoples hold for trees and forests.

“Our study highlights the critical need for close ties between researchers, decision makers and local communities to secure greater wellbeing for people and ecosystems,” Agrawal said. “Those working on forests—whether government agencies or researchers—forget far too often the necessity of working with people, not against them.” 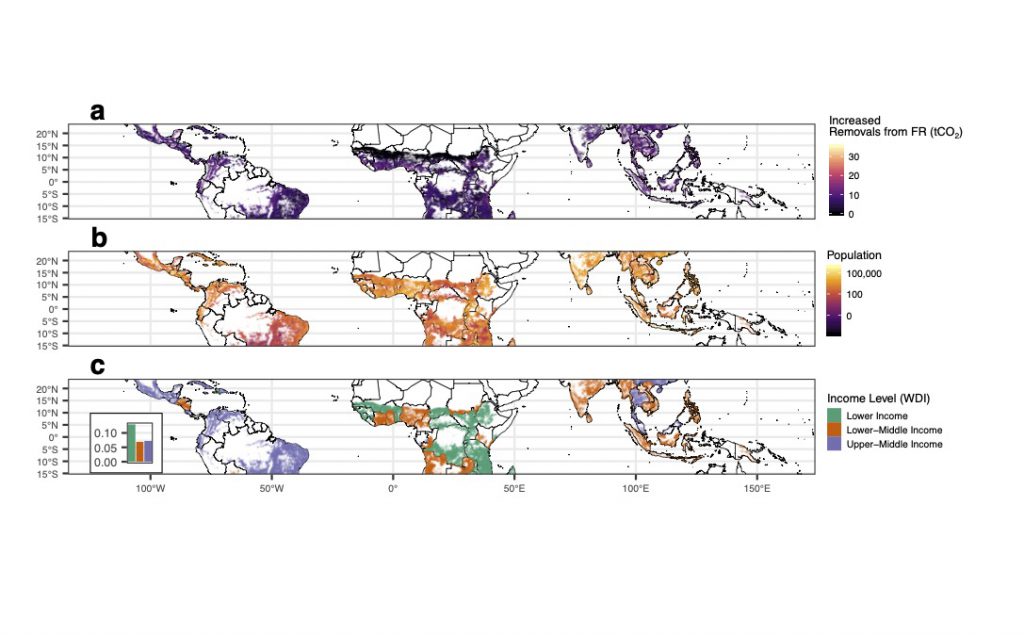 The work was supported by the Rights and Resources Initiative and the U.S. National Science Foundation.