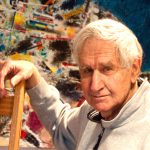 There were points in Nate Caplan’s life when he didn’t know what he would become—a psychologist or an artist. He grew up during the depression outside Richmond, Virginia, with a sure drawing hand and a longing to leave the South. In 1951, after graduating from the University of North Carolina with a degree in psychology, he won an award from the American Psychological Association for the best undergraduate research paper. But he had also won prestigious museum competitions with his paintings. Caplan chose psychology.

A second turning point came three years later. Caplan broke away from his psychology doctorate program at Case Western Reserve and went to Greenwich Village to paint, where he met Larry Rivers and other bad boys of the Village art scene. “It was very clear then that the best of them were willing to die for their art,” Caplan recalls. “When they were not painting, there were parties, and the parties were unbelievably wild.” After more than a year, Caplan returned to grad school. “[The Village life] just didn’t coincide with any interest of mine.”

Caplan began his career as a faculty member at Michigan and ISR in 1961. Over the next 25 years, he focused on the challenge of doing “open air,” community-based research—supplementing traditional survey methodology with in-depth interviews similar to those used in social anthropology. Toward the latter part of his career, Caplan worked particularly on maximizing the social utility of social science research in policy planning at the national level. Along the way, Caplan and his wife raised three daughters—and some Golden Retrievers—in their Burns Park house. “I did not come from a home where there was a mother and a father and siblings and dogs,” he says. “I still treasure that part of my life.” Caplan retired as an emeritus professor of psychology and emeritus research scientist in the late ‘80s.

But Caplan never stopped painting. Some of the fruits of that labor will be showcased in June at the Kerrytown Concert House (KCH). The exhibit, a benefit for KCH, will feature more than a dozen of Caplan’s recent works (see slideshow below). Caplan says his love of experimentation has kept him from developing a signature style. But most of his paintings are abstracts, with eye-grabbing colors and surfaces thick with paint or strips of canvas. “What keeps you going is you love a thing long enough and it will tell you its secrets,” Caplan says. “I go in a lot of different directions, and learn a lot of secrets.”

WHAT: Caplan at 80: Explorations, Experiments, and Prospects