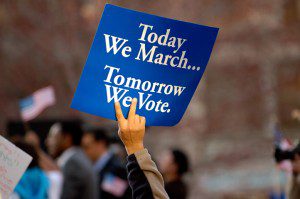 ANN ARBOR—The debate about immigration policies is shaped primarily by how one group feels about another—not solely based on economic concerns, according to a new University of Michigan study.

White Americans’ feelings about Latinos, but not other groups, powerfully drive their support or opposition to immigration policies. Previous explanations based on threats all immigrants pose to the U.S. economy or due to general ethnocentrism—the preference for one’s own group over all others—don’t fare as well.

In a study appearing in the journal Political Psychology, Valentino and colleagues Ted Brader, associate professor of political science, and Ashley Jardina, a political science doctoral student, examined how attitudes about specific groups shaped opinions about immigration policies. They analyzed data from a national representative survey, which looked at how policy opinions were shaped regarding specific immigrant groups from 1992 to 2008.

They also conducted surveys before and after the 2008 presidential election, in which 617 people completed questionnaires on various immigration issues. Many whites indicated they had personal financial concerns, believing immigration would harm Americans’ way of life and job prospects. However, these concerns did not drive support for immigration policies as forcefully as attitudes about Latinos.

The narrow focus on Latino immigrants may have been triggered by the media, the researchers say. News coverage about immigration over the past 20 years has focused substantially on Latinos.

The researchers searched for the terms “immigration” and “immigrant(s)” in articles published in more than a half dozen national newspapers from 1985 to 2009. Valentino says the results suggest that newspaper coverage seems to underemphasize immigration from Asia while it is quite sensitive to changes in immigration from Latin, Central and South America. The focus on Latino immigration spiked after 1994 with California’s Proposition 187, a proposal to end most social welfare and educational assistance to undocumented immigrants.

“Our work suggests that particular groups do, in fact, figure more or less prominently in deliberation over the distribution of rights and resources depending on news salience,” Valentino said. “The results suggest that improving economic conditions do not always lead to more tolerance for immigrants. One also must understand how groups in the receiving country are perceived.”