The first African American director of the University of Michigan’s Institute for Social Research (ISR), Jackson’s legacy lives in his published work and — equally significant — through the work and careers of the many, many people he mentored throughout his years in the world of social research.

One such person is Mosi Ifatunji, PhD, the first recipient of the James S. Jackson Emerging Scholars award. 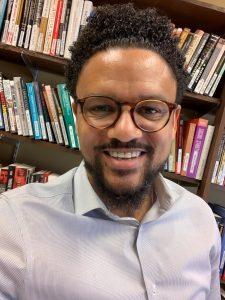 Dr. Ifatunji is an assistant professor of African American Studies and Sociology at the University of Wisconsin-Madison, a faculty associate in the Research Center for Group Dynamics (RCGD) at ISR, and a member of the Program for Research on Black Americans (PRBA). He is also a research scientist at the University of Illinois-Chicago’s Institute for Research on Race and Public Policy.

“Mosi was a good fit because his dissertation was in line with the type of research that we do at the Program for Research on Black Americans,” said Robert Joseph Taylor, director of the PRBA. “In particular, his research on Black Caribbean immigrants and labor force participation was and is quite innovative, and it’s beginning to make an impact in the field.”

Ifatunji, who did postdoctoral work with Jackson at the University of Michigan, says the award is a tremendous honor, and the culmination of a long relationship with his former mentor. He and Jackson met while Ifatunji was very early in his academic career after the two appeared on a panel together at the University of Illinois-Chicago.

“I didn’t know who James was, but he was just great,” Ifatunji said. “I slowly learned more about who he was after our appearance together, and then kept in touch with him kind of at the margins, but then as I began to work on my dissertation, he made some data available to me that was not generally available to people.

“I ended up doing my dissertation on that, on that data, and I had James’ support and guidance on using the data.”

Their relationship continued, and no matter where his academic career went, Ifantunji said his mentor always stayed up to date on his career even amid myriad other responsibilities.

“I’d walk in for a meeting with him and he’d know what I had been doing and he’d have read my paper and he’d have comments about it, which was just unbelievable considering how much work he had going on.”

That sort of commitment isn’t surprising for those who knew Jackson best. Dr. Deborah Robinson, assistant director for international projects at the PRBA, says mentorship was a key aspect of Jackson’s ongoing work and career, and the Emerging Scholars fund merely builds on that legacy.

“I think James would be proud and happy and pleased with our selection,” she said. “I think it’s just a continuation of his work and commitment to so many generations of researchers.”

Ifatunji intends to use the award to fund conference travel, but he may also apply it to some additional training in a few methodological techniques related to his research. Whatever he spends it on, though, Ifatunji says the award represents a continuation of an important legacy — and personal validation from a trusted mentor.

“The award was given to me, I’m sure, in some ways because I’m viewed by the PRBA as someone who was inspired by the PRBA and kind of carries the value system of the PRBA in my research,” he said. “But a figure like James Jackson, to receive an award named after him, …and then to be the inaugural awardee is also quite meaningful. This is probably the most important award that I’ve won.”